Research Study of Expats In Mexico Answers "How is the Healthcare in Mexico?" 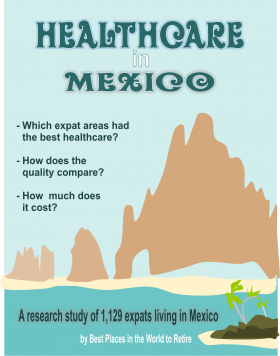 Lake Chapala, Jalisco, Mexico—March 26, 2018— Best Places In The World To Retire (Best Places) announced today the release of its third research study of 1,129 expats currently living in Mexico, “Healthcare In Mexico.”
The more surprising findings included:
“Without access to high quality, reasonably priced healthcare, a very low percentage of people in general (and an even lower percentage of retirees) would consider moving to Mexico.  That's why we did this research study: to find out what expats already living in Mexico thought of the quality, access, and cost of the healthcare they received,"  said Chuck Bolotin, Vice President of Business Development. "Lots of people who read the study will be very surprised by the results."
Alan Alexander, Chairman of the Best Places Advisory Board added, "Just like with our other studies, we designed this study on healthcare in Mexico to give realistic, actionable information to those considering moving to Mexico, so they could make up their own minds.  We also designed our study as a resource for journalists.  For both audiences, the top-line, most interesting findings are highlighted in the introduction; there are lots of clear, interesting, and surprising graphs and charts; and there is commentary to help to explain it all, not only by the study’s authors, but also by hundreds of expats, who provide a very human, firsthand perspective to the numbers.”
“It used to be that one of the main reasons not to move to Mexico was the perception that the healthcare was substandard,“ said Bolotin.  "As this study shows, that issue has now been flipped completely on its head, as more and more expats, mainly from the US and Canada, move to Mexico specifically because of the better access to healthcare in Mexico as compared to their home country," said Bolotin. "This study is a 'must read' for anyone considering moving to Mexico or anyone interested in those who are.”
The research study, "Healthcare in Mexico" is available for download here.
About Best Places in the World to Retire
Funded and run by an experienced group of entrepreneurs and investors based primarily in Southern Arizona and utilizing an innovative business model, Best Places In The World To Retire solves the problems of 1) those searching for "no spin," organized, balanced, diverse and credible information about moving, doing business, or visiting abroad; and, 2) for-profit organizations seeking new clients and non-profit organizations seeking new donors and volunteers.
The site currently covers the most popular expat destinations in Panama, Mexico, Belize, Nicaragua, and Portugal.
The main areas of the site are: 1) Community Q & A, with thousands of answers to the most often asked questions about living abroad, provided by a community of experts; 2) Location Advisor, a real time, interactive, fun and informative questionnaire that recommends the best places to live; 3) Expat Stories, where real expats share their experiences; and, 4) Marketplace, where for-profit and non-profit organizations have their commercial listings, all tied into the questions they answered and the stories they posted.  The following are available for free download here:
Best Places in the World to Retire social media properties include its Facebook page and YouTube channel.
Contact:
Chuck Bolotin
Vice President, Business Development, Marketing & Sales
Chuck.Bolotin@BestPlacesintheWorldtoRetire.com
US (520) 940-0481
- ### -