The National Dress, Dance and Heritage of Panamá

Posted by Lourdes Townshend on September 24, 2015 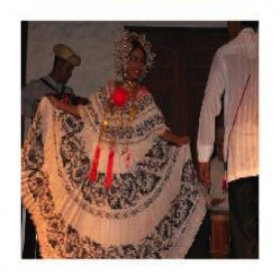 The official national dress in Panamá is the pollera. This dress is unique and takes between two to three years to make by hand. Polleras are passed from generation to generation, making them more valuable as the years pass by.

What it makes the pollera unique are several things: 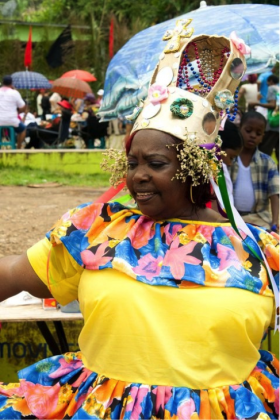 There are other regional dresses that are also very beautiful that Panamanian ladies wear for different events, like the colorful pollera montuna, where jewelry is worn, but not the ultimate expression in regalia, so instead of the wobblies, a hat or large flowers adorn the wearer’s hair. Other regional dresses include the very popular kongo and the de diablitos.

The best known dances that are performed in the polleras are tamborito, punto, the cumbia, the atravezao, among others. The most popular dance is the punto, that recalls the sophisticated and delicate way people danced at royal balls during the 18th century.

There are good hotels and restaurants in Panamá that offer special shows after dinner that feature dancers wearing polleras, like the Marriot, Las Tinajas, and some in Ft. Amador (also known as the Causeway) like Las Pencas and Mi Ranchito, among many others spread throughout the country.

Panamá has had an extraordinary folklore tradition, originating from the colonial days of the 15th century. Beautiful churches, traditions and dances are celebrated during different festivals throughout the country.  Ocú, Las Tablas, Los Santos, and Penonomé are towns that hold these traditions especially dear.  A very popular festival is Carnival, which usually occurs in February of each year before Lenten observances. To reflect Panama’s African heritage, in March there is the Congo Festival held in Portobelo, province of Colón.

Also Panamá has a terrific cultural architecture. You can see the beautiful baroque church, the Iglesia del Carmen in Panamá city that calls the faithful with a quarter of a million bells. There are also buildings or little museums in little towns with tremendous history, like in Natá de los Caballeros in the province of Coclé, named after the arrival of 100 knights from Carlos V of Spain, and whose Basilica St James is one of the oldest operating churches in the American continent.
Below is a video of a girl ice skating in a pollera.