Posted by Robert Reichert - Cuesta del Sol Condominiums on May 4, 2015 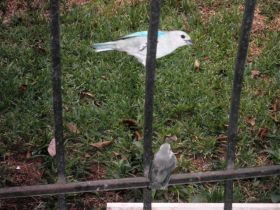 We remember as youngsters being told that if you pick up a baby bird that has fallen from its nest and put it back, the parent birds will abandon it. We believed that to be true until this past week when the myth was debunked by a couple of Azulejos (Tángara Azuleja, English: Blue-gray Tanager).

Last Saturday, April 25th, my wife was watching the neighbors trim a large overgrown bush on our property line. While picking up branches that had fallen on our side of the fence she noticed two tiny birds lying on the ground. Their nest was a casualty of the tree cutters. She couldn’t leave them there, so she picked them up and brought them into the house. I wasn’t home at the time and she called to let me know she had some new ‘additions to the family’ to show me when I got home. 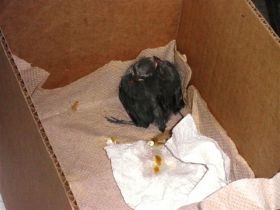 This situation occurred several years ago, as I reported in a previous story, when we ended up raising a Tortolita (small ground dove) who spent a number of years living with us, coming and going freely several times every day for food (or sometimes just for a visit). When I got home, there they were, two little mouths to feed, whose feathers were just beginning to grow. At that moment we were not even sure what kind birds these little babies were but we knew it would be a busy time keeping their little bellies full.

April 26th: Sunday morning we had their box out in the back porch and mid morning we noticed two adult Azulejos in the bushes just a few yards away. Could these be the parents looking for their missing babies? They must have heard the little peeps. We moved the box closer to the edge of the porch and within a few minutes the adults began to approach it.  A few minutes later they had summoned the courage to sit on the edge of the box and it wasn’t long before the two parents were feeding their babies. We knew everything was going to work out from there. At dark, we put a straw hat on top of the box for the night.
April 27th: Monday morning after we uncovered the box the same routine repeated itself and the parents spent the day bringing back food for the babies. They were getting braver and would continue with the feeding even if we were just a few feet away.

April 28th: Tuesday the same thing occurred and by mid morning one of the babies was sitting on the edge of the box. He had grown most of his feathers, was starting to form a little tail and had gained enough strength and confidence to a

ttempt to fly. This was an amazing transformation in such a short period of time. By the late afternoon the more mature baby was venturing away from the box on the ground, but it was getting dark and I decided to put him back in the box for one more night.
April 29th: Wednesday morning we decided he needed to be free, so I put him in the Limón tree in the back yard. This seemed to be the location of choice for the parents and they both were very attentive to their young ‘adventurer’. We watched for him during the day as he ventured about the tree with the attentive parents always nearby. 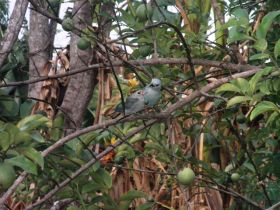 And the other little fellow is doing fine, also. We were afraid the parents might forget about him due to all the attention they were paying to the adventurer, but this was not the case. They continued to feed the little one still in the box and we supplement that when we think it’s necessary. He is growing.  Now has most of his feathers and we will probably have another one leave the nest any time now. 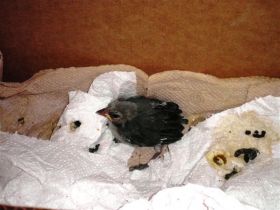 April 30th: It’s Thursday morning and we thought this story might be over by now, but the little fellow still has not spread his wings. The adventurer sibling must be on his own now because we can no longer spot him in the trees, so the parents are able to be more attentive than they were a day or two ago and are frequenting the make-shift nest regularly now. You can notice the change in the baby and he has developed nicely over the past couple of days. It won’t be long and he will be on his way, too. 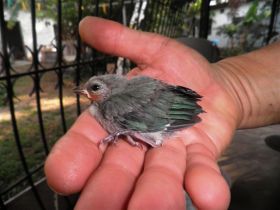 May 1st: Friday morning the remaining baby is doing fine. He looks stronger and has been flapping his wings frequently. Suddenly during mid afternoon we notice he has made his way about 15 feet from the box in the porch to a bird cage hanging on a nearby tree. We were amazed and watched as he hopped and flew the 18 inches back and forth on the nest. His parents were in the branches above encouraging him to fly up to them but he wasn't able to get enough loft. He tried climbing the wire the

cage was hanging on but he couldn't make it up to the top. Eventually he ended up on the ground and with dust upon us we decided it would be best he spend one more night in captivity. We covered him for the night expecting that tomorrow would be his last day with us.
May 2nd: Morning arrived and this is the seventh day since Eneida found the little babies. The parent birds were back again and about 9:00 AM the little fellow looked stronger and ready to go. Within minutes he was on the edge of his box. We took him to the cage he had been on yesterday and watched what would happen.

It didn’t take long and he the little fellow flew about six feet to a nearby branch. That was it. The parents were there cheering him on and by 10 o’clock he had made his way half way up the tree. Eventually he flew 40 feet across the yard into an avocado tree and we bid him farewell. 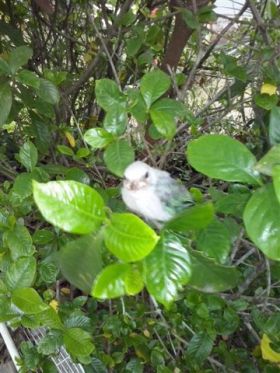 So is this a fluke; are these two Azulejos the exception to the rule? We really can’t answer that. All we can go by is what has happened in this particular case. In any event, it has been a very interesting week for all concerned.

Next I Love Las Lajas Beach