About two and a half weeks ago a stray dog got locked in our landlady’s garage.  She howled all night but we thought that our landlady was just keeping the dog for a friend.  It wasn't until the next morning, when we asked if we could walk the dog, we realized that she had no idea that a dog was trapped in her garage.  She even walked the neighborhood to find the source of the unhappy dog howls.

At that point, she was freed and she became our compound dog. We live in a large area of 6 houses behind a gate that we refer to as the compound.  She got the name became Dobbie, like the big-earred elf in Harry Potter.  She was so skinny and so scared that she wouldn't come out of the garage.  Then the 'dog whisperer', Katie, enticed her with Cheerios.  Now, 2 weeks later, she is Katie’s constant sidekick.

She’s been fed and gotten more love in this short time than she has received in her whole life. One thing about a street dog – once you give them attention and safety, they are the most loyal animals ever.

Dobbie has filled out, her fur is soft and shiny and, more importantly, she plays. She loves to run after her rawhide when Katie throws it. She runs in circles around the houses in the co 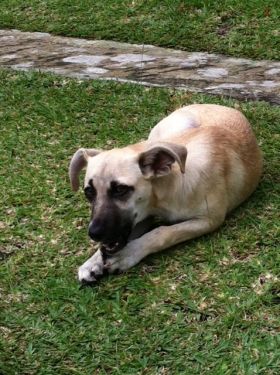 mpound. She likes to be held. So the Dobbie story has a very happy ending.

And what a difference in her appearance and demeanor. Today is Dobbie is happy chewing her toy. This weekend she will get spayed and all her shots at the Amigos de Animales Clinic.


For people moving to Panama, I would never suggest that you not bring your pets with you. But when you get here, if you have room, adopt one of the many Panamanian dogs or cats needing homes. Rescue animals will love you like no other.