Phil McGuigan and Other Heroes in Panama and Beyond

Posted by Philip McGuigan - Chiriqui United, an Association of the leading humanitarian organizations in the Chiriqui Province of Panama on February 4, 2015 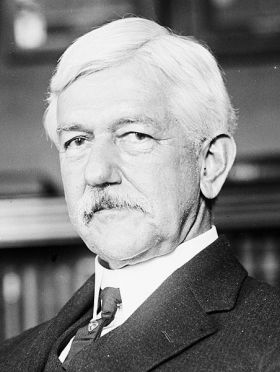 Jet Metier:  What kind of name is Gorgas, though?
Philip McGuigan:  It's Southern. His father was the head of ordinance for the confederacy in the Civil War. (“Ordinance" is basically artillery and everything firearm oriented; it was shotguns in the right hands, that kind of stuff.)
Jet Metier:  Can you tell me more about malaria? So why was he interested in it? Was there malaria in the south at that time?
Philip McGuigan: Well, yes. He actually got malaria and so did his wife while in Texas. As a result, he got interested in it. And because he survived malaria and his wife had survived malaria, they were both immune to it. And so, it made it a little easier. And then he was posted to Cuba.  He was a doctor who eventually became the Surgeon General of the United States.
Jet Metier:  So, he's a medical doctor in Texas. What year is this?
Philip McGuigan: Oh boy, I'm going to have to say it would have to be the late 1800s, perhaps the1890s, something like that. My grandfather fought in the Spanish-American War, then to the Philippines, then he came to Panama in 1906.
Jet Metier:  So you have both sides of your family in Panama?
Philip McGuigan: Well, yeah. And then, all they did in Panama during all of 1905 was work on draining swamps, doing all the malaria and mosquito control.  I believe that he worked for the Panama Canal Corporation.
Jet Metier:  And what are the places now that were once swamps? Are there buildings now? Are there neighborhoods that we would know?
Philip McGuigan: Panama City looks like Miami now. It was really a primitive place in 1905, a terrible terrain with huge rivers. Malaria was all over. Whenever you had standing water, you were going to have mosquitoes in that area and yellow fever. Basically once Gorgas took control, if you had a water tank, you had to keep it covered.
Mosquito eradication was all about getting rid of the breeding areas, whether it was spraying oil on the water to kill the larva or whether it was making everybody cover the water tanks that they used. It was all about destroying the habitat for the mosquitoes. 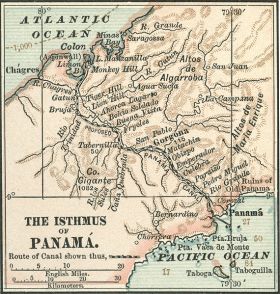 The French experience in Panama was a disaster. They came very close to bankrupting France because of two things: one, malaria and yellow fever, and two, the equipment they had, was too small for the job.
Jet Metier:  What kind of equipment? Dredging?
Philip McGuigan: Dredging or their big shovels weren't big enough. That was the major difference between the American work on the Canal and the French. The French just did not have the equipment big enough. The Canal is 50 miles long, so you have to have pretty major equipment to deal with it. And the other thing that the Americans did was that they built the railroad, and they used the railroad as a major component in building the Canal for delivery of items back and forth.
My understanding of what happened in the Canal really is more than I just read in books; it really came from my aunt.
Jet Metier: Please tell me. What is your aunt's name?
Philip McGuigan:  Kathleen Mary McGuigan.  Her mother married JJ [Joseph Jerome] McGuigan, who is the gentleman who fought in the Spanish-American war, went to the Philippines and came here.  He worked on the Canal for eight years from 1906. She was born in Panama in 1914.  Actually, I've seen the house where my dad and she grew up.
Jet Metier:  What does it look like?
Philip McGuigan: Well, it's fancy now. It was decently fancy before, because you know, your living conditions were based on your rank in the Canal Corporation, so the higher up you were, the more attractive your living quarters were.
Jet Metier:  The pictures that I saw, the houses were on stilts and had beautiful deep wrap-around porches.
Philip McGuigan: Yeah, that was very standard. The house I saw had been modified sufficiently, so I can't really tell you, but she said it was a very nice house. My aunt was born here, and went to high school. She was valedictorian of her high school class at age 15.
Jet Metier:  What did she excel in?
Philip McGuigan: Everything she did. She was an incredible woman. At 15, she couldn't join the Canal Company, so she became a paralegal for three years until she was 18. And then she joined the Canal Company.  When she retired, she was the administrative officer of the controller of the Canal. She was single her whole life.  Her work on the Canal was her life.
Jet Metier:  Tell me, what was she responsible for?
Philip McGuigan: Well, I asked her that when I first met her, and she told me the following, "Well, we pretty much hired and fired everybody." So that's what she did.
Jet Metier:  Remarkable. Did she tell you what life was like for the expat community?
Philip McGuigan: It was not the expat community, keep in mind. This was The Canal. They were called “Zonians.” And you know, it was separate; it was quite apart from Panama. There wasn't that much interaction with Panamanians, except at the very top. Your servants would be Panamanian, and so on, but by in large, the people who were working on the Canal were either US or they came from Europe or the Caribbean.
Jet Metier:  Where were the offices? 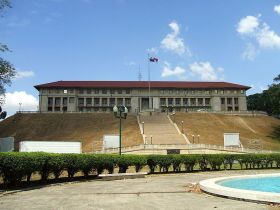 Philip McGuigan:  It's right near the Canal. There is a huge administrative building that is the center. It was one of the first major buildings built.  I remember driving by it for the first time with my aunt, who she looked at me and said, "There's my window. That's where my office was." It's huge and very imposing, very "Washington DC" sort of architecture. (Canal administrative building, pictured.)
This was 2007.  My aunt and I had gone out for lunch with her caregivers.  I said, "Aunt Kathleen, you worked at that building for 43 years. You retired in 1977. What was the last time you were there?"
She said, "You know, I don't think I've been there since probably 1980."
I said, "Great, let's go back and check it out."
She said, "What a wonderful idea."
So we drove up to the administration building with Rene Guardiola, who is a wonderful fella who runs Your Man in Panama.
I had never met my aunt before that.  We talked on the phone once, and I just jumped on the plane to meet her. I spent several hours with her, and we agreed to have lunch the next day. She had trouble getting in Rene's Kia van, which he noticed.  So he pulled over under a shade tree, left the air conditioning running, and he said, "Five minutes."
He came back five minutes later and had stairs built, so she could walk up into his van. He had a guy that had a woodshop, and he cobbled it together in five minutes.
Jet Metier:  What a lovely person.
Philip McGuigan: He is the best. I needed to thank him, so when I got back home, I had a website built for him that described the tours that he could take you on. Rene has an encyclopedic knowledge of Panama. Since I had the website built, it has been taken over by my friend, Dennis, who has done a really great job.
Rene drove my aunt, her caregiver and me to my aunt’s former office building.  Renee said, "This lady is Kathleen McGuigan. She is the retired administrative officer of the controller of the Panama Canal Corporation. She wondered if she might be able to go in and see her old office and see old memories.
They said, "Absolutely." They rolled out the red carpet; deluxe.
Jet Metier:  What did they do for her?
Philip McGuigan: All of a sudden, we had an entourage because these guys weren't there when she started.
She said, "Okay, over there was where the controller was."  She knew the entire layout of the building.
She knew the history; how things happened, why a portrait was in one location as opposed to another. She knew the entire history of the Canal from the very early days.
Jet Metier:  What did you find fascinating when you were on that tour?
Philip McGuigan: I was just impressed by the building. It is a really inspiring place to go in and see how the operation worked and had been in place, since the very beginning. It was the landmark; the artwork, the architecture inside. It was very elegant, I would say.
Jet Metier:  So is your dad younger than your aunt, or older?
Philip McGuigan: No, he was two years older. He was born in 1912. She was born in 1914. 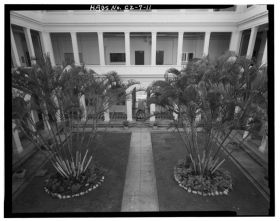 Jet Metier:  So tell me what your dad said about being an active kid, living in the Zone. What was it like? Was there alligator wrestling? (Balboa School, Canal Zone, pictured.)
Philip McGuigan: I have pictures. It was a pretty active deal. I think he felt that he got a darn good education. He basically lived at the gym and at the pool.
Jet Metier:  What about that telephone call with your aunt made you want to see her right away?
Philip McGuigan: She was the estrogen based equivalent of my father: smarter than hell with a wonderful personality.
Jet Metier:  Is there a community online of people who used to have family in the Canal Zone? What kind of activities do they have or what is their group like?
Philip McGuigan: It's called CZBrats. And actually the last time I looked, there they had been a series of fascinating articles, many of which were written based on interviews with my aunt.
Jet Metier:  Marvelous. So when you went to visit your aunt, did she encourage you to come and live in Panama? Did she influence you in any way?
Philip McGuigan:  At that point, my dad was dead and my mom was in a hospice setting. My aunt and I were just delighted to have each other.
Jet Metier:  Were you working at this time?
Philip McGuigan: Oh my God, yeah.
Jet Metier:  So you had a very busy life and you went to Panama. Can you tell me what your early impressions were of Panama City? What did you see? What was 2005 Panama like?
Philip McGuigan: I was fascinated. Panama City was already a very sophisticated place. I stayed at the El Panama Hotel, which is just wonderful; it's the grand dowager of Panama. It's sort of like The Ritz in New York. All I can say is it’s a classic. You walk in there and you expect some sort of spy to be hiding behind the palms. It's got all that atmosphere. The rooms are just gorgeous; they had just done a re-do . It's a big hotel complex with a swimming pool and casino. Just everything you can imagine. It's in El Congrejo area. At the time that it was built, you could stand there and you could see both oceans. I've seen pictures where it was high enough, so you could see. I think it was built probably the 20s- 30s, if I had to guess. In the ancient pictures, there was nothing around it.
Jet Metier:  But could you see two oceans?
Philip McGuigan:  Yes.  Now, there are 30 story buildings all around it.
Jet Metier: So what did you discover about your family when you went to Panama?
Philip McGuigan: I was fascinated. And I didn't really have a clear understanding of what my family had done until I came here. I went to the Canal museum, and I walked in, and the first thing you see is the portrait of General Gorgas. 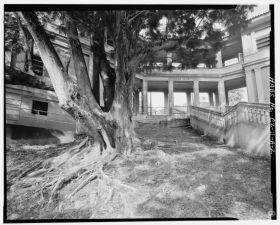