Tips and Observations About Driving Through Baja California, and the Release of Your “Inner Mexican” 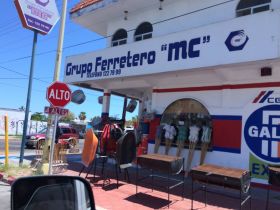 Driving…
in …
Mexico.
These three words are enough to strike fear into any news watching / Internet reading American. We are led to believe that we would either be kidnapped or just plain murdered within minutes of crossing the border. Even Mexicans who lived in the US advised us against driving in Mexico.
So, in order to add some firsthand experiences into the mix, and at the risk of contradicting common wisdom, I can at least report what we found.
Driving In General
One of the advantages of actually going to a place as opposed to hearing about it is that you find out that many of the stereotypes you had about it are not true.  As one fun example, you may remember the song “Low Rider” by War and made very popular in a movie by Cheech and Chong.  If you don’t, here are the relevant lyrics:
Low rider don't use no gas now.
Low rider don't drive too fast.
I definitely saw low riders in LA, where I grew up, but I didn’t see any in Baja; not one. In fact, when driving, as opposed to seeing Tommy Chong, it seemed like everyone was Mario Andretti.  On the highways, Mexicans drive very, very fast.
Driving Tips 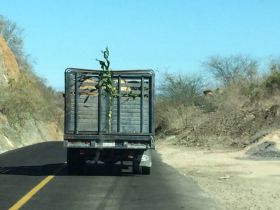 Quite often, you will find yourself on a non-divided highway (no median; just some paint on asphalt separating you and oncoming traffic); one lane in your direction, one lane in the other, and close to zero shoulder.  Driving In front of you will be a truck or some other vehicle going slower than you would like to go with it’s left turn signal on, yet, you don’t see any place where he or she is going to turn left; there may not even be an intersecting road for 20 miles.  What does it mean?  It means that the driver is signaling you that it is safe for you to pass on his or her left.  Is it?  Your call.  How do you know if, instead of signaling you that it’s safe to pass, a left turn signal means that the driver is planning to actually turn left, which would result in an ugly crash if you were in the process of passing at the same time?  There’s no real answer to this, except for context.  Good luck, and have fun.
When you come to a 4-way stop, it doesn’t really mean, “stop”; it means, “slow down just enough to take a look at crossing traffic, and if no one is there, just go right through”.  The only time anyone ever honked their horn at me in Baja was when I stopped… at a 4-way stop.  I almost got rear-ended.  By the way, this explains how, when I didn’t see the 4-way stop in Mexicali when we first crossed the border and blew right through it, no one even reacted.  To them, I was just driving normally.
The only exception to the rolling 4-way stop is when there is a car actually coming from the right or left.  Then, you slow down a little more and, if they got there first, you let them pass.  Coming to a full stop in any situation seems to be optional, but may actually be dangerous because if someone is following too close to you and doesn’t expect your full stop, you could get rear-ended.  It’s generally best to keep some forward momentum.
There are lots of one-way streets.  How will you identify them?  Sometimes, there’s a tiny, obscure sign.  Many times, there’s not.  Just look for other little clues, like all the cars being parked in one direction (although many times, this is not definitive), or, more definitively, two cars side by side coming directly towards you at 40 miles per hour with no place for you to go but backwards.  This happened to me several times, more than once in front of a police officer.  Everyone just shrugs it off and moves on.  Just find a place to back up or turn around. 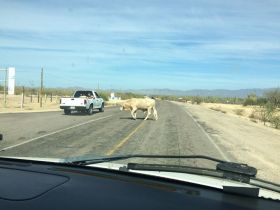 If you see a car coming towards you on the other side of the highway with its emergency lights blinking, they’re most likely trying to tell you that there are cows or other livestock in the road up ahead.  Slow way down and look for farm animals.  Then, after you see them, put on your emergency lights for a while as well, to warn drivers coming from the other direction.  This happens all the time.  Here’s a portion of a conversation between my wife and me as we drove to Cabo San Lucas:
Me: “It’s a really deserted road.”
Jet: “Yes; it’s just us and some cows…”
Me: “… that may make a cameo appearance every one in a while, just like in an Alfred Hitchcock movie.”
Jet: “Yes, and just to scare you.”
Funny as the horror movie analogy may seem, if you hit a cow at 50 miles per hour, you won't be laughing and it won’t just scare you.  It could total your car or worse.  Be mindful of crossing livestock!

In some very odd places, the left turn lane is off to… the right.  You pull in, wait for the light, and then cross traffic, hoping that everyone understands.  They do, but you won’t.
Were we never stopped by banditos, held at gunpoint, carjacked, kidnapped or had our throats cut.  Not once.
If you are like me, after being in Baja for a while, you will see a change in how you drive.  For me, being in Mexico has released my “Inner Mexican.” I love not really stopping at stop signs and pulling into traffic without too much decorum other than a friendly wave…  after the fact.  Driving like this may horrify you, but personally, I like it.
Next, we’ll take you to some great beaches…
Moving to Mexico?  If so, check out Best Mexico Movers.
See links to all Mexico road trip stories below. You are currently reading the one highlighted with the yellow background.
To see hundreds of questions answered by expats already living in Mexico, click here.
To see hundreds of questions answered by expats already living in Mexico, Panama, Belize, Nicaragua and Portugal, go here and navigate to the place you're most interested in.
Sign up for the Best Places in the World to Retire newsletter.  To see additional additional pictures and videos not in the stories, follow us on Facebook.   To see more videos of the trip, see our YouTube channel.
Want online, interactive help finding the best place abroad for you?  Try the Location Advisor.
To download free research studies conducted with over 1,000 expats currently living in Mexico, click here.
Download the free eBook of all the stories below, "Our Year on the Road & Living in Mexico-- Adventures, Challenges, Triumphs, Lessons Learned"
Links to articles about what we learned on our Mexico road trip:
Becoming a Globetrotting Nomad at 58: Would You Pull the Rope?
The Woman at the Pemex
How Living Abroad Can Reduce Your Stress
Two House Rentals Gone Wrong, and a Guardian Angel
How Traveling and Living Abroad Gave Me a Better Perspective on Time and Happiness
My Personal Experience Comparing Healthcare in the US vs. Mexico
How Not Doing Chores Living Abroad Added 36 Additional Years of Free Time to Our Lives
How Living in Mexico Can Give You a Lifestyle Upgrade
Two Fender Benders Compared: One in the US and One in Mexico
Lessons Learned From 5 Months as a Nomad-- His takeaways after selling everything at 58 and hitting the road
Links to Mexico Road Trip stories:
Why We Will Be Driving Through Mexico for the Next Year: A Road Trip Series
Experiences Crossing the US-Mexican Border at Mexicali (or is it Calexico?)
Driving From Mexicali to San Felipe in Baja California: Why Is This Man Laughing?
Driving Highway 5 South in Baja from San Felipe, and the Lake that Wasn’t There
Highway 1 in Baja: From a Yurt in San Ignacio to the Perfect Beach South of Mulegé
Arriving in Our Little Village in La Ventana Bay, Just Southeast of La Paz, Baja California, Mexico
Tips and Observations About Driving Through Baja California, and the Release of Your “Inner Mexican”
The Most Magnificent Beaches of La Paz, Baja California Sur and Surroundings
Observations About Baja Mexicans and Baja Mexican Food
Tips and Observations About Living in Baja California for Six Weeks in a Little Mexican Town
Two Squished Dogs, Some Quick Kennel Assembly, and a Cruise Through the Sea of Cortez on the Baja Ferry from La Paz to Mazatlan
The Drive from Mazatlan to Lo de Marcos, Nayarit: Confusion, No Shortage of Dried Shrimp, and Then the Prize in a Disneyland-like Jungle
Where the Jungle Drips into the Pacific: Our First Day in Lo de Marcos, Nayarit
What it’s Like To Live in Lo de Marcos, Nayarit, a Little Seaside Village About an Hour North of Puerto Vallarta
The Six Sisters of Nayarit, Mexico: La Peñita, Guayabitos, Lo de Marcos, San Pancho, Sayulita and Punta Mita
The Road from Nayarit, through Puerto Vallarta, to Lake Chapala and a Great, Big House for 60% Less Than a Tiny Hotel Room
Living in Jocotepec, on the Shores of Lake Chapala: Beauty, Free Enterprise, and Some Cupcakes
Our First Few Days in Ajijic: “Not Too Much”
How Ajijic & Lake Chapala is Like the Aunt You Always Wanted
Ajijic, and the Livin’ is Easy
Driving from Ajijic and Arriving in San Miguel de Allende, Mexico: Cornfields, Transcendence, and a Nice, Planned Housing Development
San Miguel de Allende: A Colonial, Artsy Town Rich In Culture, Pageantry and Expats
French Fries or Foie Gras? Comparing the Famous Expat Locations Ajijic and San Miguel de Allende
The Road from San Miguel de Allende to Puebla: Undiminished Anticipation and an Unexpected Oasis
The Road from Puebla to Cordoba, Mexico: Otherworldly Canyons, Meeting Celebrities, and the Cordoba Gift Exchange
Potholes, Detours and Other Driving Challenges Southeast of Cordoba, Mexico: Just Follow the Pigs, Keep Calm, and Have Faith
Merida, Yucatan, from a 400-Year-Old Veranda to a Mystical Cenote
My New Mayan Friend, and the Evolution of Merida, Mexico
From Merida to Valladolid to Akumal, Mexico: Interesting Friends, How to Pronounce 'G' in Spanish, and Pre-Planned Inspiration
Mexico’s Riviera Maya, Including Cancun, Playa del Carmen, Akumal and Tulum: From Modern Resort Destinations to Mayan Ruins
Akumal to Mahahual, Mexico: Way Better Than a Spa Day
Mahahual to Chetumal, Mexico: An Otherworldly Lake, a Time Machine, and Great Presents for Everyone
Chetumal to Cordoba, Mexico: More Ease and a New Cooking Style, But Watch Out for the Kids!
Cordoba to Puebla, Mexico: Soaring Mountains and Lots of Gastronomy
Puebla to Lake Chapala, Mexico: A Place Worthy of Return
Now That Our Road Trip is Over, I Can Tell You What It Was Really Like to Live in Mexico for a Year
Editor’s note: you may freely reprint the article above, provided you put this at the beginning or end:

Next Highway 1 in Baja: From a Yurt in San Ignacio to the Perfect Beach South of Mulegé