North and South America were divided by the sea, until the Isthmus of Panama was created three million years ago. It was the biggest and reportedly the most significant geological event in 60 million years. Prior to that date as the Earth's plates began to join, the Pearl Islands emerged from the sea. Indigenous tribes lived on many of the Pearl Islands, including Contadora, and Pre-Columbian artifacts have been found there. The biggest island in the chain is Isla del Rey where more than fifteen pre-Columbian recognized archeological sites of the “Cuevas” and “Cocle” cultures have been identified. However, none of the original population remains. 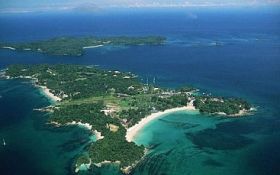 The islands were first occupied by Indians, who with their leader Terarequí, were wiped out within two years of the islands' discovery by the Spanish. Spaniard Vasco Nunez de Balboa named the islands, Pearl Islands, on his discovery of them in 1513 due to the many pearls which were found there. Another Spaniard, Gaspar de Morales, exterminated 20 local Indian chiefs not long after and gave them to his dogs to tear to pieces. Dites, another local chief, presented Morales with baskets of pearls, but this simply made the Spaniards want more and hastened the destruction of the native population. The Spaniards then needed workers to harvest pearls, so they imported slave labor in the 16th century from Africa whose descendants now live on the islands, particularly Isla del Rey.

The islands were frequently used by pirates in the years that followed and were relatively undisturbed until the 1960s and 1970s when the building of a resort on Contadora took place where the Shah of Iran retreated in 1979.

Contadora Island ("Isla Contadora" in Spanish) is one of Panama’s most developed and beautiful islands. Contadora Island is situated approximately 30 miles off Panama’s Pacific Coast, making it easy to reach via a 15-minute flight or one hour via one of three ferries.

Contadora has an airstrip, measuring 675 meters, which will accommodate planes up to four engines with 100 passengers.

Contadora has a reef, so it's ideal for scuba diving or snorkeling and is blessed with 11 beaches with pristine white sands, sheltered coves, beautiful turquoise waters – teeming with tropical fish.

Playa Larga, Cacique, and Ejecutiva are considered the best.

Contadora is a prime refuge for many of Panama’s most wealthy citizens. It has about 130 homes, scattered throughout the island, with a year round population of about 300.

Contadora’s major roads are paved and maintained, but backroads are not.
The island lacks traffic lights due to the small number of cars on Contadora. More popular modes of transportation are golf carts, four wheelers and bicycles 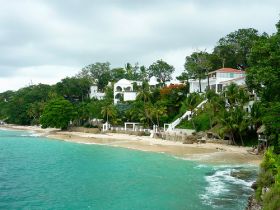 The island is well-known globally as being: the Shah of Iran’s home while exiled in Panama; CBS’s base of operations for three seasons of their “Survivor” series; the favored negotiation site for the US and Panama for the Panama Canal Treaties.