Cruisin' the Caribbean: Tips for the Ship

For retirees/expats considering a cruise, here are a few tips I garnered from a recent Caribbean island-hopping adventure my wife and I enjoyed. 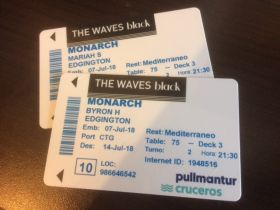 It was appropriate that I’d celebrate my 70th birthday at sea, since the older I get the more I find myself ‘at sea’, and the less I understand this wacky world. Be that as it may, the cruise was grand, and I learned a few things about such endeavors that I’m happy to pass on, for what they’re worth.
We booked passage with Pullmantur Lines, a top tier maritime provider of such tours. We went with Pullmantur for three reasons: One, the trip was (reasonably) inexpensive; two, the ship was staffed by a Spanish-speaking crew, so we could practice our Espanol; three, the Monarch sailed from Cartagena Colombia, an hour flight from Medellin where we live.
Our first port along the way was the tiny island of Curacáo. This Dutch holding near the coast of Venezuela is a gem of a place to visit, and to inhabit I assume, though there’s not much to do on Curacáo when the cruise ships depart. Next stop, Bonaire. If water sports are your main pursuit, this tiny dot in the Caribbean has excellent snorkeling & diving. Port number three was Aruba, One Happy Island, as all the T-shirts say. Next stop was Colón, Panama. We didn’t leave the boat there, but there’s excellent shopping nearby, and of course the Canal, which we have done.
That was the itinerary; now for travel tips for potential cruisers.
Monarch Berthed at Curaćao 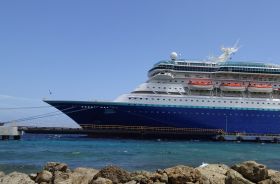