Living the Good Life in the City, Panama

One of the wonderful advantages of living in Panamá is the variety of lifestyles and environments in this small country. Think of California on a smaller scale. You can live in one of the Pacific Coast beach communities, in the cool highlands of El Valle or Boquete, the islands of Bocas del Toro on the Caribbean side, in a country home in the interior, or in one of the most cosmopolitan cities in Latin America. When my wife and I first moved to Panamá we settled on the Amador Causeway on the outskirts of the city. The Causeway, Albrook, Clayton, and other areas in the reverted areas of the former Canal Zone are attractive suburban communities for Zonians and expats.
With so many of our business contacts, attorneys, accountants, developers, clients, and doctors in the city we decided to move near downtown. We found a large apartment on the 34th floor on Avenue Balboa with breathtaking views facing Panamá Bay. Across the Cinta Costera is the Panamá Yacht Club. Fireworks are sometimes shot from the breakwater which also has two helipads for the helicopters that land there. The Cinta Costera is a large landscaped boulevard that has numerous recreational facilities like basketball/soccer/volleyball courts, walkways for biking, roller blading, jogging, walking, designated fitness areas for all ages, a new restaurant, stages, and other entertainment venues. My wife and I particularly enjoy walking to the fish market. 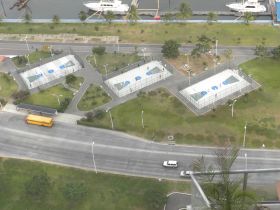 Traffic is heavy in the city, but we sometimes save up to an hour of time getting to appointments compared to when we lived on the Causeway. If we have flexibility in our schedule we just look out our windows to check if the traffic is light. People have remarked to us about how loud the traffic must be. Yes, when you are down at street level it’s quite loud, but the higher you go the quieter it is. It actually was louder on the Causeway with the truck traffic, motorcycles on Thursday night, and rumba buses on the weekend.
We also are close to many of the excellent restaurants in the city, most which are only five to ten minutes away. It’s very easy to get to restaurants along Calle Uruguay, Via Argentina, in Punta Pacific, at the many hotel restaurants, Casco Viejo, and the Amador Causeway. Many of our friends live in the city, so it’s always fun to make spur-of-the-moment plans to meet for dinner nearby. 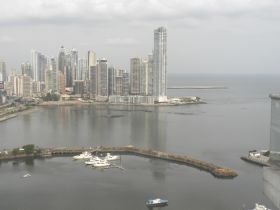 The accompanying video gives a glimpse of the gorgeous ever changing views from our apartment, including sunrises, sunsets, lightning storms, and constantly changing cloud formations.  We have floor-to-ceiling windows and a wraparound balcony that provides maximum vistas. We only pull the shades down when the sun is shining brightly in the morning. We also have large windows in the dining room and the two bedrooms that give us a variety of city and rainforest views. From our second bedroom/office we are able to see the Centennial Bridge which is one of two bridges that crosses the Panama Canal. In other words we have about a 300° view. The night time views are especially spectacular.