What is the price (or value) of freedom?

Posted by Paul McBride - Inside Panama Real Estate on August 13, 2015

I first came to Panama City in the fall of 1997.   Even then the city was vibrant, bustling and full of life. The towering skyscrapers that now dominate Avenida Balboa were a distant vision and the high end residential districts of Punta Pacifica and Costa del Este had yet to be built.  Just getting into the city from Tocumen International Airport could be a nightmare.  The toll road leading from the airport wasn’t complete and the notorious city traffic jams were just as bad then (if not worse) than they are today.

Riding through the boulevards, avenues and steamy streets of the city, I could feel the pulse of a country poised for bigger things.  The air was electric with change. The return of the canal to the Panamanian people was a few years away and the country had a sense of a bright and prosperous future.

As it turns out, the handing over of the Panama Canal in 1999 was the catalyst creating the biggest economic boom in Latin America.  Embracing the opportunities that came with control of the canal, Panama set off on a course of infrastructure expansion and unprecedented growth.  Growth that continues to this day.

Over the next few years I visited Panama on different occasions and each time I ventured further afield, exploring more of the country.  There’s no question that Panama City is impressive but it’s the interior of the country, the farmland, beaches, mountains, small villages and miles of breathtaking coastline that make up the heart and soul of the nation.
It was during these travels around the serene countryside that I found something that I hadn’t been looking for.  Something that was missing but I didn’t realize was lost.  Freedom. 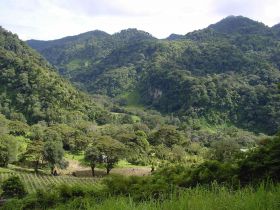 It didn’t take me long to realize that Panama was one of the freest places that I’ve ever visited.  A good friend of mine once said, “The true measure of freedom is the right to be left alone”.   What he meant by this was that freedom is defined by the ability to make decisions without unwarranted interference and then living with the consequences of those choices.   During my travels throughout Panama I discovered that most of the country enjoyed a very simple life, unencumbered by overzealous regulations and free of stifling political correctness.   In the communities I visited if there was a problem then the people got together and figured out a solution.   No one waited for the government to come in and fix their problems.  Most Panamanians have a healthy understanding that the government isn’t there to be a problem solver.  Very refreshing if you ask me.

Many of the expats I know in Panama share this experience of freedom, of a simpler life with little or no interference from the government.  There’s a learning curve when you live or invest in any foreign country and Panama is no exception.  Sure, you’ll have to deal with government bureaucracy when you get your residency visa, open a bank account or get your driver’s license and this can be a frustrating experience since the process can move very slowly here.  But, once you clear these hurdles it’s smooth sailing.  It’s highly unlikely that you’ll deal with a government employee again until it’s time to renew your driver’s license or register your car.

The simple freedoms we enjoy in Panama may seem like a basic and natural concept.  But, in an ever increasingly complex world where more and more governments are trying (and in many cases succeeding) in micro managing every aspect of your life, Panama stands out as a small beacon of personal freedom.

Oh, there’s one last thing I’d like to add.  The flip side of personal freedom is personal responsibility.  The government of Panama simply doesn’t provide a lot of services.  The cost of freedom means that you’re responsible for your own life, whether handling your personal health care, dealing with security issues or taking care of your home and property.  But, for me, that’s a price that I’m more than willing to pay.