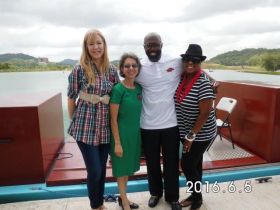 Panamá has always been on a global path, “pro mundi beneficio” (for the benefit of the world).

Since the 15th century, Panamá was the main route for gold from South America to Europe, mainly Spain.  This is one of the reasons why Panamá was always the center of attacks by the pirates at that time seeking wealth, and the city of Panamá was ultimately burned, leaving only the famous ruins of “Panamá la Vieja” (Old Panamá).  We also have other ruins of great defensive forts, like St.  Lorenzo that you can admire in the province of Colon, and the one at
“Las Bóvedas”, in “Casco Viejo”, which has a tremendous history within its walls.

At that time, the usual transportation was horses, carriages and dunks.  Now, 6 centuries later, as a cosmopolitan and modern capital city rises from all these ruins, Panamanians are very proud to present to the world a magnificent one of the “eight wonders of the world”, the Panamá Canal, that has been transporting hundreds of thousands tons of cargo between two oceans, bringing prosperity to every corner in the world. 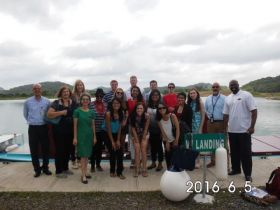 Being Panamanian is pretty funny.  We are born and raised here, and have been privileged to see the Canal every single day in our daily back and forth, but that doesn´t mean is not one of most important engineering mega projects of all times.   If you transit the Canal, you will be astonished by the marvelous organization required to run it.

Of course, due to security concerns, most operational centers are restricted from the public, but visitors can admire an amazing visitor´s center in both cities, Panamá and Colón (Pacific and Atlantic oceans, respectively. The tour is about 6 hours and costs $10 per entrance, and partial transit may cost $60 for 4 hours.)  There is a 4th floor museum by which you can read firsthand all the history since the Canal was built from 1904-1914 until the new modern area, the EXPANSION and the new wide locks for the new Panamax ships.

As a note, at the excavations for the expansion, several archeological items of extreme historical importance were found, including things from centuries ago.

Until now, the Canal had 3 pairs of locks (Miraflores, Pedro Miguel and Gatún).  After a vote permitting it by all Panamanians, the inauguration of the expansion, on June 26, 2016, at a cost of about US 5.5 billion dollars, will create a new extra pair of locks in the Pacific that can handle the new mega ships Neopanamax.

The new locks will reduce the waist of water by 7%, and reduce cost of transportation by a considerable percentage, as well as offering numerous logistic advantages to ship lines, and everyone involved in this industry, bringing of course, an ultimate reduced cost for customers.

But the invaluable benefit of this expansion is the opening of a new era for global commerce between continents.  Most important ports around the world have been very busy adapting their infrastructure to be able to handle the new ships that the Panamá Canal will be able to accommodate.  As Panamanians that makes us extremely proud to be, precisely us, a country with not yet 4 million people, the one that offers the world one of the most important projects ever seen in history, making it A MODEL in the maritime and logistic industry, and the immense influence the Panamá Canal represents to the world.

The Canal made a raffle between the main Canal 15 ship lines users to determine who will be the first ship in crossing the new locks.

The M&L Transports Magazine was privileged to be able to invite a professor of Logistics at the University of Arkansas and his students for a once in a lifetime presentation of the simulator at the canal pilots training center for the new locks, in the Pacific operations center, restricted from the public.

Before the Ministry of the Canal began the expansion, their authorities traveled the world seeking the most advanced facilities, equipment, training centers and ports, to offer the best of the best.  The pilots of the Panamá Canal take over the control of the ship at the entrance of one ocean at the canal, and release it at the other end of the canal, on the other ocean.  The training for these pilots takes approximately 20 years altogether, until they are ready to fulfill this position.  They are highly trained, and must be Panamanians.
Top picture: M & L Transport personal (the two on our left) at Panama Canal Expansion presentation.  (The writer is in the green dress.)
Bottom picture: Invited students and others at the Panama Canal Expansion presentation.

Next On the Panama Papers, the World Economy, and the Panamanian People