Posted by Lourdes Townshend on November 6, 2013

The Guna Yala´s, from San Blas, Darién, Republic of Panamá

Ethnic facts:
The people living in this region were first called "Tunelagá".  Then after their 1925 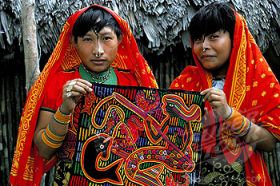 rebellion, their name was changed to "Republic of Tulé".  According to historical information, this community was helped by a Canadian adventurer named Richard Marsh .  Then, they were known as the "San Blas district", and their name was based on the first name that Christopher Columbus gave to this archipelago as "Islas de Sanbellas".  (Sanbella´s Islands).
Even though it was created  in 1938, it wasn´t until 1953 that it was officially ratified by Panamanian law.
Lately, in 1998  their name was changed again to be "Kuna Yala, but it wasn´t until November 22, 2010 that Panamanian President Martinelli´s administration changed the name to "Guna Yala", in consideration of the Education Bilingual Intercultural agreement, because the letter K didn´t existed in their alphabet.  This name means:  "Montaña or Tierra Guna". ( Guna Land or Mountain).
It is located at the north part of the Isthmus of Panama, on the Atlantic Ocean (Caribbean) side.  Part of their land is on the mainland, but the rest are islands, in the "Mulatupu Archipelago".  The majority of these islands are formed of coral and sand.  Out of the 365 islands, only 50 are inhabited.  Their approximate territory is 2,308 km2 (about 890 square miles), and the last census in 2010 shows 33,109  inhabitants.
Their houses are made out of straw and cane, and they sleep in hammocks.  Traditionally their houses have two sections: the bedroom section is called  "big house", and the other section, which contains the kitchen, dinning area, and has other uses, is called "fire house".
Marriage is established at the bride´s house, and once they get married, the husband has to live at the wife´s family house.  Women have a distinguished place in the community.  They also highly  honor the seniors.
They have tried by all means to keep their culture and language.  Their women traditionally wear on a daily basis their colorful dresses made out of "molas".
Some cruise lines have tours to these islands, in addition to visiting the Panamá Canal.  There are several tour operators that offer nice tours as well.