Posted by Lourdes Townshend on December 9, 2013

Panamanians take Carnival very seriously.  Many people prepare themselves for months to participate, in any way, in the Carnival, and visitors book their flights almost a year in advance to enjoy these four days of music and dancing.
A version of Carnival is called "Fiestas del Rey Momo" (King Momo party), which is celebrated throughout  the country, but mainly in Las Tablas, on the Azuero Peninsula.  Lately more and more towns are incorporating their very own way of celebrating regional events for Carnival.  The main cities have a queen, who leads all four days of parades and shows.  This tradition is believed to have started in the colony, when people dressed as kings and queens, but it wasn´t until 1910 that it officially began, when one of the requirements was to select a queen.  In the present day, Panamanians forget the origins of Carnival but participate and enjoy one way or the other, especially the young ones.  Usually at Carnival everyone who has a country house retreats to the "interior" whlle the city (Panama City) is very quiet.
Carnival starts Saturday, before Ash Wednesday (beginning of Lent).  On Friday is the coronation of the queen followed by a very late gala dance.  Saturday continues the night events.  Sunday is Pollera Day (a "pollera" is the national dress of Panama), when almost every woman wears her best.  Queens and their 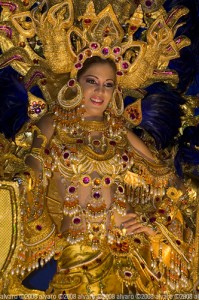 princesses go on a parade on beautiful floats, usually sponsored by private companies or government agencies.
Monday is dedicated to a series of groups, with each group having members who have the same customs, wear the same costumes and dance in a parade for hours.  Tuesday is the main and last day... with beautiful floats and when the queen wears her best fantasy dress* (an example of which is to the right) , finishing with the "entierro de la sardina" (sardine burial) at breakfast.
Of course, people take all these days off from work, and offices reopen at noon on Wednesday.  Plane tickets have the tendency to increase for this season.
Even though almost every town has their own way of celebrating, the towns and cities most considered for carnival are:  Los Santos, Penonomé and of course, Panamá City.
* A note about the "fantasy dress":  These are the kinds of dresses the queens use every day at Carnival.  The queens compete with each other as to which one has the best dress, with each queen keeping her dress a secret until she wears it at the parade.

They also use these dresses when representing Panama at Miss Universe, Miss World or other contests, as well as several miscellaneous presentations.

Those dresses cost A LOT of money and are specially designed for each individual queen.  They generally have a lot of feathers, and all kinds of imported or local things that the designer can possibly think of.​

Next Christmas Tradition in Panamá