Posted by Lourdes Townshend on April 7, 2014

Public transportation in Panamá made 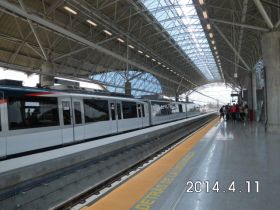 history last April 5, 2014 with the inauguration of the first metro (subway) in Central América.
Above and  beyond all expectations, the construction of the modern metro was made in 38 months.  It has 20 trains of 3 wagons each, accommodating 600  people per train.
But the most amazing thing is that the President of Panamá, Mr. Ricardo Martinelli, a nice and simple fellow, decided to drive himself the 13.7 km (9 miles) of the inaugural trip, with special guests, taking only 23 minutes, while taking other transportation might take up to 2 hours.  In each station were special performances from different artists, including "tango" from Argentina, and a beautiful presentation by the Chinese Community.  The President, very emotional, said the metro was constructed "by the people",  "to the people".
The new metro will also serve as tourism public transportation, as 8 stations will be elevated , and 7 underground.  As of now, there are 3  projected lines:

This could change, as plans are properly coordinated.  Line 2 could be finished by 2017, according to authorities. 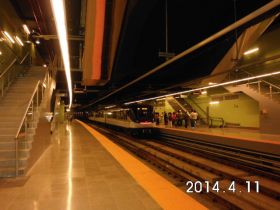 The metro will be free for the entire public until further notice, probably more than 2 months.  From there, the price has not yet ben established, but everything points that will be around US $1 each way, and will also have transfer points.   Even though it is free, all visitors must carry a card, which can be purchased at any station.  You must have exact change of $2 for the card, plus the fee for any additional route you want to purchase in the future (that is not needed now, because the train ride is currently free).

The rules are very strict.  There are no pets allowed, no eating on trains, no firearms, no large bags or baggage that would obstruct the space, and many other basic rules, like no drinking liquor, no vendors or selling, proper dress code, etc.

Security is also highly considered.  Police officers are always at the station, along with metro personal to help all visitors, and 2 police officers will travel in each train.

Panamá also made history not long ago, with the inauguration of the new international airport of Río Hato (located almost 3 hours from the city of Panamá between Penonomé and Santiago​), which will bring growth and comfort to the areas of the central part of the country.

All these modern projects emphasize that Panamá is ready to keep the  #1 destination title.  Panamá also offers a special emergency medical insurance to visitors, all included for the first 30 days, courtesy of  the Panamá government  Tourism Authority, that you must request at your arrival at the Airport.

And all those who have the retiree (pensionado) visa with Panamá resident "cédula"  ​have the same privileges as Panamanian residents of several senior discounts in airline tickets, trains, parks, doctors office, hospitals, prescriptions, movies, hotels, restaurants, some stores, entrance to the Canal and more.    Who wants to miss a visit to Panamá?

Panamá offers modern facilities, an amazing natural environment, smiling and warm people, excellent weather, and most of all, the desire of accommodating each and every one of you. 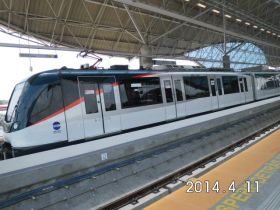 [Editor’s note: According to a press release August 1, 2014, the Panama Authority of Tourism stated that no charge tourist insurance coverage is no longer being offered.]

Next Anne of the Wild and Sea