Their Stories About Why They're There 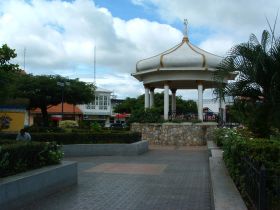 I am so tired of seeing the words 'their,' 'there' and 'they're' misused that I thought I would put all three in the title of this post. That way, anyone who might chance on this post could at least see that each of the homonyms is spelled differently and might also deduce from the example that each has a different meaning.

Besides the purpose stated above, the title of this post refers to the reasons people I met in Panama had either settled there already or were exploring that possibility for the future. The reasons below were given to me either in response to my direct question or I was able to form a conclusion from conversations that left little room for doubt in my mind.

Consider the quote below from Ayn Rand's "Atlas Shrugged:"

"The only power any government has is to crack down on crime and criminals. Well, when there aren't enough criminals, then one makes them. One declares so many things to be a crime that it becomes impossible for men to live without breaking laws. Who wants a nation of law-abiding citizens. What's there in that for anyone. But just pass the kinds of law that can neither be observed nor enforced nor objectively interpreted and you create a nation of lawbreakers - and then you can cash in on their guilt."

Doesn't Rand's quote remind us of how things have been becoming in Canada, the United States and Europe?

Is Panama any better? I am not yet completely familiar with the power of the state in that country but I imagine that the level of bureaucracy has not yet advanced to the crushing point it is in North America.
But it will, eventually, reach that point. It always does. In the meantime, though, there might be quite a few years where people can feel relatively free in Panama.

I love Panama. But I personally won't be moving to Panama full-time. For a number of reasons, mostly business-related, it would just not work for me.  I will however build a home in Chiriqui for part-time winter use and will enjoy the relative freedom Panama has to offer, if only for a few months a year.
I can't think of a better place to unwind and recharge.  There is much to do.  The people are friendly.  It is green and lush.  It is warm.  It is a relatively short flight from Ontario, Canada, where I live, compared to say, Argentina or Ecuador or Chile.  Infrastructure is modern.  And although prices have escalated in recent years, they are still relatively low compared to what we're used to in most of North America.
So, now you know not only why 'they're there' but also why I'm there, thanks to 'their' impressions of Panama.
So there!  ;-)

Next Getting A New Start In Your Old Life