Anglers take note:   Big fish in a big river!!
The week before Christmas five of us guys decided we'd take a road trip and head to the south part of the country and do some fishing.  Several of us had been there before and hooked some good sized tarpon, but the size and the ferocity of the fish caused us never to land one.  We took a three hour drive south of Managua, and then an hour and a half panga ride (similar to a john boat) east on the Rio San Juan toward the Caribbean.
Accommodations at the lodge included three good, solid, square meals, comfortable (though rustic) rooms and transportation for just about $300/person for 3 days.  Tranquility in the afternoons and evenings, with beautiful flowering trees and greenery all over.  One of our amateur agronomists actually got some vanilla cuttings to put into his own garden. The quiet was broken in the mornings, because the howler monkeys got very vocal, and alerted other troupes of their tree top territories.
To our delight, there were dorsal fins of tarpon all over the swiftly moving water, and the Nicaraguan guides tied on fairly small lures. Trolling brought us a couple of strikes, and one of the guys hooked a big fish.  I grew up in Oklahoma, where a hooked black bass will stand on its tail and dance across the water.  I've never seen fish six feet in length leap out of a fairly shallow river.   The toughness of these large fish caused us great excitement, but it was short lived.....we lost three the first days due to thrown hooks or a broken line.
The third day, things changed.  One of our buddies, Darrell H, hooked a dancing tarpon and the fight was on.  The large fish dragged the boat, a guide, two fishermen and gear for over an hour and a half, tiring itself out in the process. 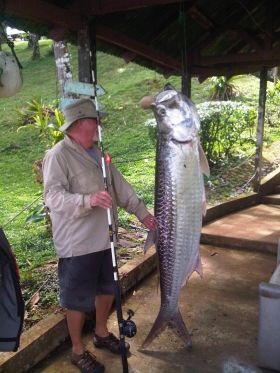 They started the battle about a kilometer west of the lodge, and fought to over 2 kilometers east of the the docks.   Two more guides grabbed a boat and headed to help their young counterpart guide.  We watched as the two boats finally returned to the fishing camp, and we got to see first hand the huge size of these fish.  The scales are the size  of saucers, and they did not have a weight system to accurately measure the fish.  Normally catch and release, this huge fish unfortunately expired, and the guides told us they'd carry it upstream to an NGO that could use the meat. 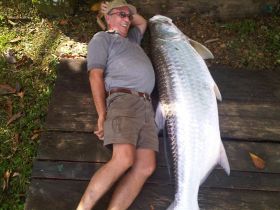 So........
We got some great memories and a couple of great photos, too.  If you want to know more about this trip, just contact me.  There are plenty more fish in the water for you, too.

Next Working After Retirement in Panamá