The End of the Road At Playa Venao, Panama

Posted by Jet Metier - Best Places in the World to Retire on January 8, 2013


The Divisa to the south of the Panamanian Highway is not a scenic ocean drive, except when you get near the terminus, in the Azuero Peninsula, where there is a ledge only big enough for two lanes, between the mountains and the coast with its tiny little coves.  The road turns, and with each bend the ocean is glimpsed where the density of trees have become sparse. The water, unlike others parts of Panama, can finally be seen at the speed of a cruising car, in that uncommon stretch between Pedasi and our destination at the furthest point of the paved road. 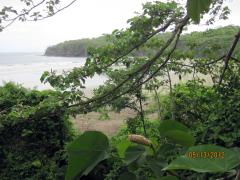 We tour the open mat of the jungle as it descends to the shore, and past dream vacation homes and reclusive retreats that cut into the forest scene. This is a rare opportunity, to travel with the beach at your shoulder, in a country where the sea can only be met searching down dead-end lanes, screened by the ownership of others.

We know from the map one cannot drive by paved road in a continuous loop around the boundaries of the Azuero Peninsula.  The barrier of the national forests stop steady travel, and one must either double back or take a loop through the center of the land mass.  But this inaccessibility makes one more curious, more determined to see what is on the other side of the hill; that rise that is impenetrable that you strain to cross. In a modern world of roads to everywhere, to be denied access is terribly attractive.

There are no services, but trickling waterfalls abound. We see a little inn that prompts surfers to stay there, and enjoy the bitchin-ness of rough living away from the hassles of modern conveniences. It is all so lovely and restful, to skirt the mountains and see the contour of the ridges dressed in tropical finery. 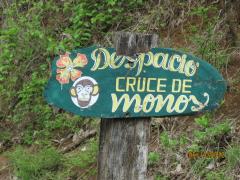 But there are signs of warning, the danger lies in the crossing of monkeys and surfers.  Both subjects are understandable, not from the words on the posts, but the comical illustrations that warn that they may break from the branches and tread-worn paths, to dash across the road, and do your bumper damage.

We find a place to stop, a large parking lot in Playa Venao that separates two establishments. 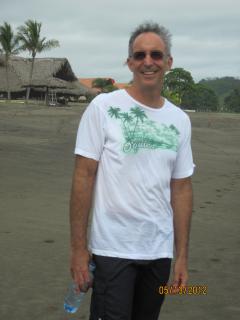 One is a hotel with a ranchito, an open-sided eatery with a thatched roof, and the other is only a restaurant, also plein -air with a covering that expands across quite a few tables. It looks like a place Hollywood- types would meet for trysts, sipping cocktails through black straws and peering over the top of their sun glasses, which are not needed for the glare of the sun is not present that day. We chose the place that is only a restaurant, because it is huge and contemporary, as chic as one would expect from the co-owner,  the wife, who is slender and blonde as a runway model.

From my position at our sleek table, I can have a long look upon the view of the headlands across the bay.  I think there was a rocky island, separated ever so slightly from the mainland that has become my focus rather than the open sea. People were clambering over it, to reach the top where a lone tree met the sky; its flowers would have to be visited by insects that would not mind crossing over the curl of the sounding waves.  It was a surf-able beach, but with no one plying its running curves. We sit right outside the shell of the building; in seats long enough to share with nine or twelve with intimacy. 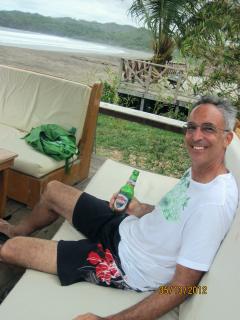 A few tables down, a young man is asleep on the cushioned bench. His friend looks out over the horizon, perhaps remembering the set of tasty waves they had earlier rode. The waiter, a man from Spain, thinks nothing of this, and brings us drinks and conversation of life in Panama. The grayness of the tide tosses itself to and fro and ranges very deep from the source; we are separated by its restless agitation by a wide expanse of sand that is level and dark. It is hard to tell the time of day.

We take a walk along the beach. We pass the other restaurant with its happy revelers. I don’t remember having to acknowledge another person as we made our soggy trek.  The sand is pocked by tiny holes, where crabs crawl in and out, bursting the bubbles of the foam.  The shore is clean here, no debris to look away from, but there is driftwood aplenty, and a young man has chosen a good-sized log to sit upon motionlessly, with his eyes closed.  All around is the loudness of the waves, coming from different directions onto the shoreline.

We see the egress of a stream, the fan of the water escaping into the sand, the boulders left at the forest edge, the earth cut and divided, providing fresh water to the salt.  The forest canopy dims the already grayed light as we walk along a path that leads inland. The splash that whirled around our ears once so turbulent is now gone, hushed so thoroughly by the close knit of leaves and branches flanking the trail.  There are cattle behind barbed wire fencing, standing in their muddy paddocks, leggy animals with long floppy ears, casually drinking from water in the regular depressions in the soil.

When we turned back and returned to the restaurant, day was ending. Now there were surfers on the break, two young women, each taking turns, tumbling off their boards. When they did paddle back and lay on the cushions as the other young man had done before, they were exhausted, panting, seriously tired by their efforts.

We had dinner near the center of the ranchito, ordering from the daily special menu, mostly of fish, if I remember correctly, but of the particulars, I don’t recall, but that it had a very modern look and taste to it. There was a woman who came in and out of the kitchen whom I presume was the cook, and conferred often with the bartender, who was also our waiter, and the same svelte woman, who was chasing after her toddler, the woman’s long hair, light against the night’s darkness.  She introduces us to her husband, a professional surfer; a tall man, dark as she was fair. What a beautiful couple.

I believe we sat by the warmth of a center fireplace, drowsing in the heat of it. I looked towards where we had walked along the strand, and saw pinpoints of lights, miner’s lights strapped to the heads of five men.  These Americans arranged themselves around a large table, and immediately set up a card game before they had ordered. We learned that it was their tradition, since they were very young, to meet somewhere in the world to surf together.  All were married except one. All had sheepishly agreed that their surfing safaris could get dull, because the locations they chose were often remote and the waves they glided upon were not entertainment enough, all day and all night.  I inquired about the beams they wore.  They were to illuminate the crabs in the sand as they walked.

When we left, we could see the few houses behind us facing the ocean. We saw 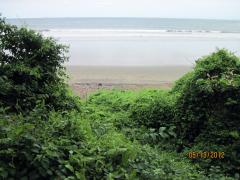 them, as they looked forward to a future that they were in a good position to meet, their owners pioneers in a beautiful area where the mountains cascade down through a thicket of trees, to an ocean funneled through coves, lined with sand and dry on their vantage points, where  they could arrange their deck chairs to see the opening and closing of every day at the water’s edge of Playa Venao.

Next A Visit To La Rosa De Los Vientos in Panama; a Place Apart From The Hubbub World