Posted by Jet Metier - Best Places in the World to Retire on February 11, 2013

In this world, there are still places where the road stops, even in a country like Panama that has severed itself in two, to connect two oceans, the road concludes, and motoring ceases, seemly arbitrarily. It is a bit frustrating that the edges of the coast cannot be traced completely, unless you are very foolhardy, and would want to bushwhack through the thicket of forbidden land. Slowly we travel, to prolong the tour, to the southeastern end of the Azuero Peninsula, until we must discontinue our trajectory. 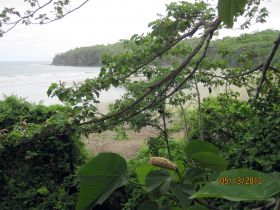 Because we must double back the same route, we see from different vantages,  the emerald of the trees front-lit and back-lit, hyperbolic leaf forms demanding attention, the tangled jungle loosened just for the road, the steep, wet sides of the mountains, slippery with exuberant growth that is cooling and restful, varied and beckoning for further discovery.
We see the sign for Playita Resort, having a fun time bumping down the dirt road, glad we have a reason to turn off the main one. We see a flash of a life form through the trees. My husband cannot name it; it is large, the size of a second-round draft NBA player, a bird stalking on long legs, during that time when God was, perhaps, having too good a time with his band of cherubs, seraphim and beard-trimmers in his animal workshop, permitting this eclectic creature with a small head, outsized-body and thick tail, off the inspiration board and onto the assembly line, just for the heck of it.  With an emu on the property, I felt we had just arrived on Disney film set and what a romp it would be.
We drive into a parking lot and find someone to ask permission to visit. We find a young man, who is a nephew of the owner, raised in the United States, who has come to Panama for better opportunity. And as he implies by nodding to his bombshell girlfriend, staying because he likes the look of the local girls. We pay him $5.00 to enjoy a day pass at the beach and wander the grounds, which are sheltered by tall trees whose upper branches, the height of cathedrals, form an awning, for which the state of the sun must be guessed.
We first notice a stately building with beautiful balustrades, which has a center hall that leads upstairs, which we do not take. Instead we peer through the windows on the first floor, seeing the woodwork that has been expertly formed. There is a walkway across the top, level with the lower branches of the trees that brush it. Across the way, there is another two story building with a seaview, an open construction site, with a few rooms finished, the guests coming and going, towels around their arms heading to the beach.  In the center there is a ranchito with a roof of tight thatch, whose pillars are 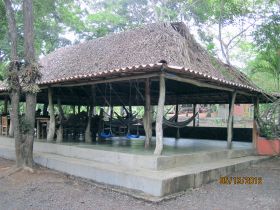 really the greater part of curved trunks, planed just enough to be smooth-skinned. It is a pavilion with not only tables and benches to shade picnic meals, but swings for the kids to fly over the stairs that it is raised upon, and rows of hammock  to rock until slumber.
Nearby is a little restaurant, completely open to the wafting breeze, large pots and pans, and other kitchenware, hanging from the rafters outside,  and on rustic seats, we sample the catch of the day. We eat, and in between, we whistle and trill, trying to tease the birds closer for an amuse bouche from our meal. Besides bird cries, we hear only Spanish spoken around us.  It seemed a place that mostly only locals knew.
Throughout there are places to sit and rest and smell the ocean and watch others as they take pictures of each other with the backdrop of the animals that pass like extras in a movie. Unlike other places along the strand, there is a restroom, which has room to change out of wet swimwear.  All paths seem to lead to these wide stairs made of flat stone, and by the look of sand upon them, must lead to the water, and the origin of that hushing sound and that faint scent of the Pacific.
We walk around, amazed that we are in a wild animal park.  The iguanas scamper along the branches overhead, they are over-stuffed and rotund from kitchen scraps and the favor of the guests who feed them and have given them affectionate names for their good looks, like one much loved iguana was “Brad Pitt.”  They may look like miniature prehistoric reptiles, but they are as tame as terriers and love to lounge where grandfathers doze on benches and little kids explore the dormitory birdhouses.  They share an open air aviary that includes toucans, silly looking birds that clack with their long beaks, of hues like Fruit Loop cereal. They peek outside of their homes in the hollows of the trees. There are other beautiful birds that we cannot identify, but make Panama their base and nesting sites. 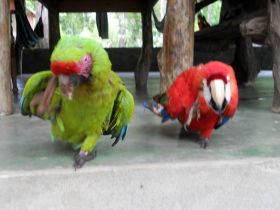 There are parrots that walk the ranchitos, searching for tidbits on the ground, strolling along the branches, daubed strongly in florescent colors: red, lime, marine blue, orange, magenta, aqua and navy, with over-lapping feathers and fanning tails; they are hard-beaked and have dot-like eyes, more vibrant than Robert Cavalli’s runway stars, drenched in show-stopping sequins. Used to the photographers, they pose, preen, show the splendor of their many- hued wings, and when they take flight, their plumage aloft, brushing the air with their own personal kaleidoscopic, everyone sighs in awe.
Little girls carried Chihuahuas to and fro, not close to their chest, cuddling them, but with straight arms in front of them, the dogs with their paws dangling in the air. We are told three pups belong to Lester, the owner. The nephew asks if we would like to meet him. Lester comes out from the building, a trim and handsome man, and leans against the railings that have arches clad in stone. He tells us to come up to his apartment.
For man who has a compound, that an eccentric millionaire would desire, Lester’s apartment is small like a European suite. There is a front room with a television set to sports, a rattan chair and cushion like an inverted satellite dish, and wonderful pictures of himself as a winning jockey in the United States.  His bedroom is like the captain’s quarters of an antique ship, the exotic wood chosen masterfully and gleaming with hand-rubbed care. How this boy from Panama had the vision that he could win big, riding horses in the United States, I should have asked, because it is amazing; but I did. Lester worked very hard for years, and earned the loyalty of his sponsors. Then he returned home, like many loving Panamanians, it was to care for an aging mother. 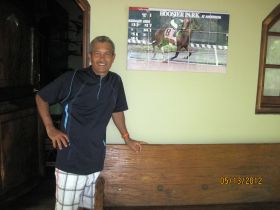 But then he got bored with his early retirement, and bought this property, and built here when there wasn’t even electricity in this part of the country, using generators to develop the land. The affinity he had for horses, urging them to do their best, he coaxed out of terrain and the trees, which he hewed to make his buildings and property delightful.  Soon people began to ask if they could use his beach and stay overnight, and from there sprang the idea to make better amenities for his paying guests.
He gave us a tour of the other structure that he was still in the production mode. In this third act of Lester’s life, he had awakened that part of him that is a natural artist. He does not mill lumber. He takes wood, and directs his craftsmen to give it new life as rustic beds, chairs, tables, a clothes rack, stately doors and striking mirror frames, all unique and personal, like Robinson Crusoe would have designed. Each room is handcrafted and you see Lester’s creativity and lightness of spirit everywhere. He has brought stone in to break-up the plaster walls, and inserts it in irregular shapes. Within the stones are vignettes of Panama and carved pieces that look like fossilized insects. But his favorite motifs are of birds, colorful in their habitat, at eye level for us to review, in mosaic tile in the rooms and in the hallways. Some rooms are two-stories, some have full-sized refrigerators, and the ones with balconies have strung along their length, hammocks that overlook the ocean and the tiny fraternal islands centered at the front of La Playita’s cove. 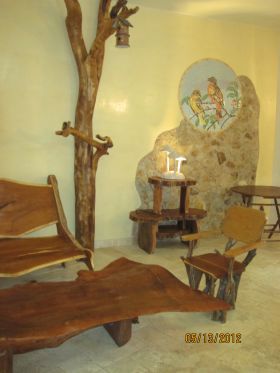 We walk down to the beach. I try to imagine Lester, as he first saw this place, paddling around as he snorkeled, the beach an almost enclosed circle, a stream somewhere feeding in new sand, the trees barricading the shore, and the islands, breaking up the infinity of the horizon. I don’t know what this place once looked like centuries past, but I see the traces of a lagoon. Perhaps, the sea rose, and now it rushes over the edges of the barrier islands, and are softened by the encounter. The waves of the ocean, having lapped the islets, now exchange splashes with the water that has passed over the timbered slope of the coast, and onto the holiday-makers, who play in the gentled surf.
We sit in at a table with palm fronds roof, listening to the rippling water. There is a group of young people playing volleyball on the sand. They stand in a circle tipping the ball to one another. The girls wear bikinis with triangles of netting around their waist, laughing as they set up the ball and bumping it with their palms, not keeping score.  My husband, used to the desert and craving the sea, goes beneath the surface with his snorkel gear, and comes out much later, a rising Poseidon. 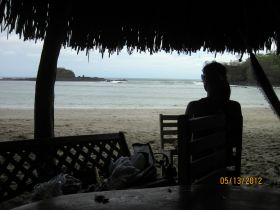 When we leave La Playita, we see the signs of the lots for sale. How Lester can share much more than he already has, we just can’t believe it. And yet, the possibility is tantalizingly there, to live where the road will dissolve, shaded by the forest, within sight of a captured ocean, which is embraced by the land and filtered by islands holding each other lightly.

Next The End of the Road At Playa Venao, Panama