A Sunday Event Calls for Rain 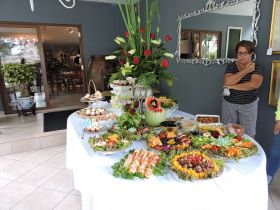 There were balloons on the gate, chilled beer, and beverages, white and red wines. A table with awesome meat trays, wraps, stuffed pastries, 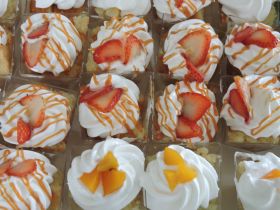 vegetable trays, cheese and fruit. The desserts, which  came from a young lady (an industrial engineer) in David were almost too pretty to eat. Everything was delicious; presented beautifully. And it rained. The rain was soft a little while and a few shoppers and friends came by. Then it would come down in torrents!

The nice lady (Renny) who catered the event hales from Texas. A gourmet cook, she excelled in this, her first catering gig! Everyone knows how the damp affects the textures of food. Renny made it seem so fresh and yes, it was work keeping the trays filled. It rained hard for a long time as she filled trays again and again. They always looked 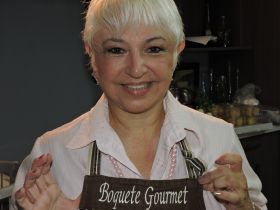 beautiful, edible and tasted as good as they looked.
When it rains hard and people are dressed-up they hate to get wet, so we noticed that the ones who did show up were a hardy mix of Panamanians and expats, with umbrellas and raincoats! Everyone enjoyed the store opening. They shopped and looked, mixed and mingled for over an hour for the most part. So maybe the heavy rain was good for keeping a more or less captive audience. 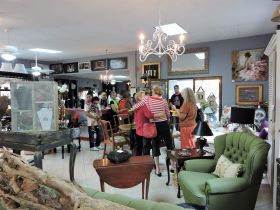 Boquete folks are a hardy lot. Locals do not mind the rains.  Life goes on, the people stay busy. The hosts kept people engaged. They kept a smile on their faces and enjoyed the people who did show up. As disappointing as the rain was, it did not ruin the day. I was impressed with the wonderful caterer and the awesome desserts by Melissa from David. It was a fun rainy Sunday in Boquete, cheers we said as we toasted the success and the rain! 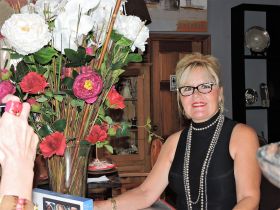 Next Province of Chiriquí, Republic of Panamá