Many people have this idea th 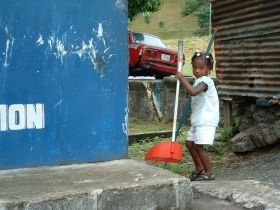 at Panama is a backward place with grinding poverty, poor infrastructure, political instability and lots of risk for investors. In fact, while there is poverty there in relative terms, the people are happy, relaxed, friendly and open.
Much of the country is pretty much like parts of California or the American south, and was so, long before swarms of gringos arrived at the start of the current economic boom.

What is happening in Panama is truly amazing. The entire country is a beehive of activity. Billions of dollars are pouring into the country and those dollars are being spent on projects of every description. The increased tax revenues to the Panamanian government allow for dramatic improvements to infrastructure. In much of Panama, there is low unemployment and everyone who wants to work is working. Panamanians are industrious and quite entrepreneurial, so this generation is going to benefit significantly. The next generation will benefit beyond what we can imagine. All this while some other Central and South American countries are moving sideways or backwards and the so-called 'first world' is approaching bankruptcy. The difference is entirely due to the infusion of capital because of the welcome given to capitalists and their money and the fact that so many individuals are 'getting out of Dodge' in North America because they are tired of being taxed to death or manipulated by over-bearing governments.

One of the things I like in Panama is that everyone is treated the same. There is no racial tension, at least not that I have seen. Blacks and whites and Hispanics and orientals all mix and live together and treat each other with respect. I'm sure that if Martians or Vulcans showed up in Panama some day, they would get a few curious glances for a day or two, then become part of the general milieu in no time.

Panama is worth exploring for anyone who is looking to move abroad, whatever the reason.