Building a House in Panama Part 2- A Christmas Miracle! 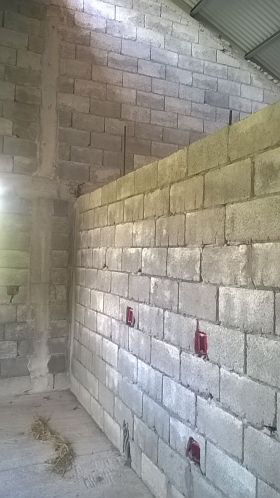 What does it take to build a house in Panama?
This is what I was able to get done in the last 12 months:
It was a productive year, apparently.  Although I didn't realize that until I took a look back and made a list of the year’s accomplishments.  The frustrations of the lag in time to get particular things done makes it seem like nothing is getting done as time flies by.
As I’ve stated before in my earlier story (to read, click here), you need to be patient with the pace of work in Central America.  The “manana” syndrome is strong in these parts.  Things that should take days, take weeks, and things that should be done this month may not get done until next year.
As I wrote in the last episode, the walls were “rapelloed” (stuccoed) before I got there, and the windows were in, and a steel door was installed on the second floor.  The rapello came out pretty nice and the door looked good, but the windows were another story.
Prior to my arrival, my neighbors, out of the goodness of their heart, put a sheet of plywood across the window hole that faces the direction of the predominant wind to prevent (or minimize) the continual leaf accumulation.  This was great at reducing the leaf cleanup that I faced every time I visited.  However, it really confused the window guys.  The window guys thought that maybe I wanted that sheet of plywood there rather than a glass window, so they didn't install a window in the most important spot for a window - Hahahahahaha.  All you can do is laugh, because if you don’t, you will have a stroke.  Because of this, the entire 5 weeks I was there, I had no window on the windward side of the house.  I couldn’t get them back up there to fix their screw up - and this was not due to me being an American jerk or something like that - I never spoke to them.  I asked my neighbor, the Colombian who arranged the window install to talk to them.
Please don’t mistake my discussion of the window situation as negative; it’s just an illustration of how things go down here - slow, and at times ridiculous.  I get a kick out of it actually.  It makes me laugh even now when I think of it.  I am literally smiling as I write this, thinking of what the window guy must have thought about the plywood.
The windows that were installed are funny too, compared to what a North American is used to.  The frames of the windows are built on site with aluminum.  The glass is single pane and lightweight.  Of course, that’s all that is needed where my house is located - I don’t need heat or air conditioning at 5,000 feet of elevation in the tropics. 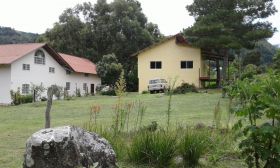 The painting of the exterior walls was a fair amount of work.  I used 3 coats - the first was a clear concrete sealer, the second was a light-yellow water based exterior paint, the third was a darker yellow oil based exterior paint.  Supposedly the oil based paint lasts longer in the tropical environment (we’ll see).  Due to the height of the walls, I used a long extension ladder plus extensions on the roller handles.  I had a Panamanian help with some of the painting.  I spread the painting project out over a week or two to allow for drying.  January is the windy season where I’m at, so the paint dried quickly.
After the exterior paint was finished, I decided to start on erecting the interior walls on the main level.  The bottom of the walls was already complete to the floor plan so all I needed to do was complete the walls to finished height and put the concrete cap on to tie all the walls together.  I contracted a Panamanian to build the walls.  We agreed at a price of $400 to do all the work.  I paid for all the materials.  I probably paid $200 to $400 for the concrete and steel.
I am really happy with the work competed by Alcy (the Panamanian).  He was a hard worker, and he was a bit of a perfectionist - which I liked.  He took his time rather than hurry up to get the Gringo’s money.  He mixed all the concrete by hand, built the concrete forms for each wall individually, and wired the boards together to prevent separation and concrete leakage.  On top of doing a nice job, he was a really nice guy overall.  He spoke zero English, and my Spanish is abysmal.  We had fun.
Now my house must weigh a million pounds, as the walls are concrete, the floors are concrete, and the roof is steel! 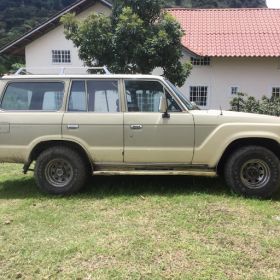 The next thing I accomplished was the purchase of a car!  I am a firm believer in a low-profile existence, especially in areas of the world that have large differences in wealth - like Central America.  In the U.S. I am a regular guy, but in rural Panama I am a “Rich Gringo”.  Therefore, I was interested in getting a car that would fit in with the locals.  I bought a 1984 Toyota Land Cruiser diesel from my neighbors.  It is tan, ugly (beauty is in the eye of the beholder), tough, and common enough to not draw attention.  It has a diesel engine so that it gets decent fuel economy, and diesel is cheaper in Panama.  Four-wheel drive is a luxury, but a valuable luxury in the countryside.
Currently the Cruiser is still owned by my neighbors until I get down there and run the paperwork around.  Panama has annual registration (license plates) and insurance requirements that I’ll have to deal with when I get there as well.
The single greatest accomplishment of 2017 for my Panamanian house was the electricity!  It took 2 years to accomplish.  Of course, if I were there full time and I built the house from scratch, I would have (probably) gotten the electricity sooner, but since I’m a part time expat, it was no big deal.  My next trip down, I will be able to unlock the door, walk inside, hit the light switch and have lights!  It will be a whole new thing!  I can’t wait.
Getting the permits, stamps, and all the hoops jumped through was truly a challenge, and without good friends and neighbors it would have been impossible.  My friends in Panama took my drawings to all the offices in David and Concepcion, ran around with a translator, and paid the tab to get the stuff needed to ask for a power hook up.
My neighbors informed me that the power was turned on December 24th.
It was my Christmas miracle!
So that’s the update for the end of 2017.
I expect that during 2018 I will have interior walls stuccoed and painted and if all goes well maybe electric sockets upstairs!  It’s really starting to come together.
Stay tuned!
Pictures from top:

Next Five Complaints and Five Praises About Living in Panama