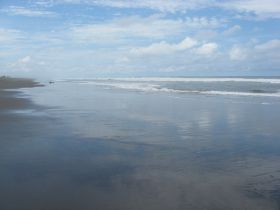 I have met and spoken with many North American ex-pats while in Panama. I'm a curious guy, and one of the questions I often asked was why they were there. The answers weren't all that surprising to me.
A guy waiting to get at his safety deposit box, in my Panamanian bank, told me he retired to Panama at age 58 because he could. He could never, he said, do that in the United States. Was he happy with his decision? Yes.
There are a lot of people like him, younger than 65, living on peanuts (actually oranges and bananas and mangoes and pineapple and great Panamanian beef) and having fun. They no longer have to pay exorbitant rents, extortive property taxes, and heating and other utility costs.
Some people are there because they like the ecology and the diversity of flora and fauna. Nowhere in the country are you ever more than a couple of hours from either the Pacific Ocean or the Caribbean Sea, or both. Pristine jungle areas are available for exploration. Scuba diving and snorkeling is available everywhere. Got a boat? Anchors aweigh!
How about the political climate? Pretty darn stable, and the Panamanian government is probably much less likely to step on more of your rights than the bandits at home, wherever that might be. The economy? Booming along at 6% or 7% annual growth or more.
Is the economy likely to keep growing? According to a market research expert I met at breakfast at the Hotel El Panama in 2006, yes. He was in the country doing research for an international insurance company. His recommendation? Jump in. Above average growth is expected in Panama for years to come, according to his research.
Worried about currency depreciation? You should be. It is increasingly an international world, and currencies fluctuate in value against each other all the time. What will happen if the Panamanian currency declines? After all, devaluation and hyperinflation are all too common in Central and South America. The Panamanian currency will indeed fall against the Euro and the Yen and the Deutschmark and other strong currencies, but only because it is pegged one-to-one with the American dollar which I think is doomed. That's what you carry in your jeans, in Panama -- greenbacks. What you get back in change is usually a combination of American coins and their Panamanian equivalents. They are interchangeable. The advantage of all this is that if you get an American pension or other American income, it is always going to get you by in Panama even if it is worthless against other currencies.
I am not planning on moving to Panama full time myself. I have too much going on in Canada and would have too many things to unwind. I will, however, invest there, have a second home there for when I visit, and have friends there.
Panama is worth a look. It's worth a look simply because it is beautiful, friendly, cheap and accessible, much like an ideal date or mate.

Next Advice to Anyone Moving to Panama