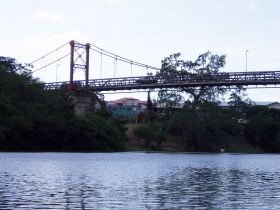 A bridge.  Some hills.  A river.  Interesting?  Taken individually, maybe not so much.  But wait!  If you can find all three together, then you almost have a match made in heaven.  I say almost.  Now if you throw in a town, then – and only then – you have attained nirvana!

To be sure, the third largest urban setting in Belize is not quite paradise.  However, San Ignacio sports enough merits for city sainthood, and that will do in an imperfect world.  Saint Ignatius Loyola, the Roman Catholic Jesuit Founder, bestows upon the town its saintly name.


Interestingly, San Ignacio could easily claim to be Belize’s Eternal City; for like Rome, it nestles on seven hills, or at least several hills, though two in particular shoot upwards more like cliffs than hills, I’m here to tell you.  I suffered the misfortune of having a friend who lived atop one of these daring declivities, and I performed the required aerial act to reach his house only once, ever after denouncing repeat performances as lunacy.

The kindly Macal River befriends San Ignacio’s eastern profile.  It’s smooth, ebony waters keep a close eye on downtown.  Now then, this is not always a good thing.  Sometimes it takes a notion to flee its bed and head out for a night on the town.  Fortunately, the river was not restive during my year in Belize a decade ago.  However, I witnessed signs of its transgressions on the walls of the buildings nearest its reach.  Such is life with a riparian neighbor.
(British- made Hawksworth Bridge suspended over the Macal River, pictured above.)

We now come to the bridge.  Ah yes, the Hawksworth Bridge, lulling across the Macal River coursing thirty feet below.  This profound expression of engineering that resembles the Golden Gate Bridge shrunk several times provided me with my first endearment in San Ignacio.  The bridge and I did not “meet” in person, but via a web picture.  My heart was aflame at first sight.  I said “alright” to San Ignacio at that very moment, before even knowing about the rest of its scenic situation.

That said, you will certainly appreciate my disappointment to learn that this bridge does not serve as the grand gateway into San Ignacio.  Ahoy! With Belize’s narrow thoroughfares come narrower one-way bridges.

Thus, arriving in downtown San Ignacio, one instead alights from a floating pontoon bridge downriver from my dream bridge.  “My” bridge sends a body one way out of town.  From the outset, this disturbed me greatly, I’ll have you know.  It did not seem fitting to enter town by way of an inauspicious conveyance the likes of that low-slung floating bridge.

Admittedly, over time I befriended the peculiar charms of that little water-treading bridge.  Then came the day I met up with a contrary driver leaving town via this route.  He obviously decided on the floating bridge as the best way out of town for HIM, disregarding the fact that it was the wrong egress from town.

Curiously, he paid no attention to my already being adrift in the middle of the bridge when he bounced onto it - making for quite a bobbing, seasick ride - and obliviously continued headlong in my direction, showing no inclination of altering his course or even noticing mine.

Short of taking a dive off the side, I put my Land Rover in reverse and headed for the hills, or at least land.  Of course, the listing little bridge was not happy about two cars simultaneously joining it, so it fell to fits of heaving and lunging, making for a rather perilous retreat.

It was not until a walk into town on my second day that I realized San Ignacio’s eastern water gateway was bettered by its western approach.  You see the hilly, high altitude part of town lies to the west and north.  Thus, by accessing the city via its western Bullet Tree Road, a soul enjoys an unparalleled panoramic vantage from one of the tallest of San Ignacio’s high hills.

From that summit the eye wanders between the river, both bridges, downtown, the lofty clock tower of the police station/court house (the second manmade landmark in the city), and can even take a gander at Santa Elena across the river.  It is all there, appearing pristinely perfect in its picturesque setting. 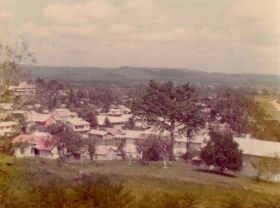 Now I must tell you, Belize’s cities, like me, look their best from a distance - or in low lighting.  Coming face to face with reality upon descent, the crumbling aspect of San Ignacio suddenly materializes. One soon finds oneself amidst a confusion of streets meandering roughly in-tune with the rivers route, and a hodgepodge of unremarkable buildings, all wedged into a block-wide strip, the only flat surface between the surrounding hills and the river.  That said, the scene, although unkempt, is by no means off-putting.

((Hillside overlooking San Ignacio, Belize in 1976, pictured above.)
I must say, I found something convivial about this topsy-turvy-looking town.  For all its shabbiness, it exists as a real town, not an artificial, cloned environment, like a shopping mall surrounded with asphalt.  Of course, there’s not much of the latter in Belize to begin with.

The city pulses with activity and vibrancy.  For the city person I am, this meant a lot.  Furthermore, this natural environment for human activity coincides with the down-to-earth life lived in Belize.  For all my personal difficulties while living in Belize, when roaming the streets of San Ignacio, somehow nirvana seemed palpably close.

Belize’s “Eternal City” also feels as cosmopolitan as any great city, especially when one considers its size.  A congenial habitation of happy urban activity among foreign and indigenous people, San Ignacio offers a taste of the “real” Belize, not a sequestered enclave that some seek.

Better still, San Ignacio even boasts a Mayan ruin!  However, I am afraid you’ll have to huff and puff up the side of the same hill that my friend lived on to reach it.  At least you won’t have to worry about an awkward meet on a one-way bridge!