Getting in Trouble in Panama

One of the ways I make my living is on the Panama Expat circuit as an advisor or guest speaker. One of my favorite lines is, “If you want to get in trouble, you have to work at it in Panama.” In my almost 19 years here, I have been robbed twice. Each was basically my fault since I didn't follow my own advice. 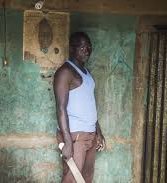 In every place I live in, I like to walk around a lot to get the local 'feel'. When I first came to Panama City, it was a boring Sunday so I hit the road. I ended up walking through the Santa Ana district. Not a good area. I was walking along the freeway that serves the city. There was a wall of a demolished building on my side of the road and a 2 building slum on the other.

Sure enough, 3 teenagers popped out from behind the wall. They had an old, rusty 38 and a 45 in the same basic condition. (I don't know about you but young kids with old guns and trembling fingers do tend to make me nervous.) They took my day pack and the dollar I had in my pocket. (I have lived in enough countries to know enough to put my money in my shoe. No one ever looks.) They fled into one of the buildings.

Shock naturally set in. So I am sitting by the wall trembling and wishing I was Bruce Lee, when I saw a big man sharpening a machete in front of the buildings. (Everyone has machetes here. I have 2.) He motioned for me to come over. I yelled in my bad Spanish that I didn't have anything left to steal. He smiled and made 'wait here' motion. He then disappeared into the building and came back with my pack. I couldn't believe it, said thanks and hustled back to my apartment.

The second incident was in the Rio Abajo area of the city. (Again not a great neighborhood.) I was waiting outside of my friend's apartment building waiting for him to meet me – at night. I had had some drinks and nodded off. Again 3 teenagers stole my pack (different one and different 3) and ran away. In my drunken logic I tried to chase them and fell flat. Took about a month before I could walk right without screaming.

In general what the tourist reports say is true – Panama City is basically a safe place to live. Much better than most countries actually. Unless, however, you are a stupid Expat who doesn't know enough to stay out of the risky areas alone....