Then Comes the Dawn

It is the same sun after all. Places seem familiar when you arrive in Panama City. You recognize the clean modern airport at Panama City as being so much like the airports in the United States. As you leave by car, taxi or bus you still feel quite impressed by the ease of it all. Once away from the airport, passing shopping venues, multi story apartments and condos, there are billboard signs with well known brand names the same as in the places you left behind. After a refreshing night's sleep in a nice, modern hotel in downtown you have a breakfast then a brisk walk in the hotel district and once again it is almost too familiar. One would think you landed in Miami or some other tourist coastal town in the USA. 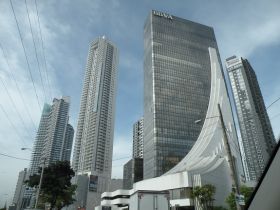 If you drive from Panama City to David you will notice differences. At first subtle. The Pan-American Highway is a busy highway just like the interstates in the U.S.  You slow down as you pass through the small towns. Most smaller towns do not have the American franchise names that larger urban cities have. Buses and taxis are full of people coming and going. These public transportation vehicles stop all along the highway picking up people and letting others off. You pass new construction in every village, town and major bus stop along the highway. Building new stores, businesses, changes all over with a growing middle class drive the new shopping malls, new schools, improved hospitals, convenience and grocery stores. Bigger and better coming soon! Much the same as in America. 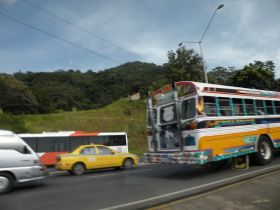 Some areas have been burdened by lack of rain for several months, even years. However lush forests, pretty flowers and well tended gardens are everywhere. The drive form Panama City is long, about six to eight hours depending on traffic and weather, road construction and festival season. It is a chance to see the people in their busy small towns. To stop and have a meal as they do in a small un-air conditioned cafe. You can purchase fruit from a roadside vendor.
Photo opportunities are everywhere. Cattle and horses grazing in green pastures are favorite subjects of mine. Pineapple and sugar cane crops in one stage of growth or another call out to me as well. Blue skies or even the rain clouds tend to enhance the beauty depending on the time of day. So many places to see. So much to invite you to linger as you head towards David, then on to Boquete. Panama is familiar, comforting, serene; the same but different. It is old and new. It is slow and fast. There is a language difference for many ex-pats, but the people are so nice about helping you if you try. (Draw a picture if you do not know the word.) 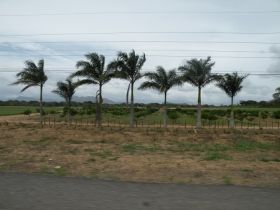 We have been here over two and a half years The differences are not that bad. We enjoy better health here, and we find it a less stressful life. We miss our grandkids and children but see them on the computer.  Every day is the same and yet different. We start before the sun comes up with coffee on the patio, commenting on how beautiful it is here. 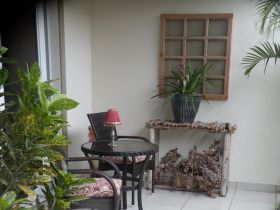 Then comes the dawn! 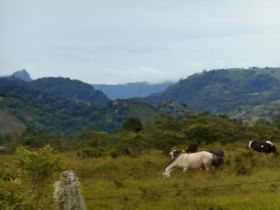 Next Health Matters and the Change Has Been Good