60 Shades of Green; How Boquete, Panama Seduced Me

Posted by Sharon Schwartz on September 9, 2013

60 Shades of Green; How Boquete Seduced Me 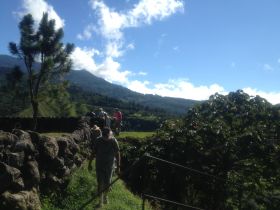 Maybe I was ready to be “taken” when I arrived in Panama to study Spanish ....but I sure didn’t think I’d be living there within the year.  After being “liberated” from a position I thought I’d be in forever or at least until retirement, I suddenly had the “gift of time.”  So why not have an adventure, learn a language, see the world? Panama is where I started. I found an inexpensive Spanish school that offered a home-stay with a Panamanian family and booked the flight. Three short weeks later I was hooked on this small country. I went back home put my house on the market in June, it sold in July and I moved to Boquete in September.

Why Panama?  The long and short of it is, I fell in love with the country and its people but it was Boquete that captured my soul.  A 45 minute flight from Panama City brings you to a whole different world here in the Highlands; a beautiful respite from the torrid, tropical heat of the capital.
Boquete is surrounded by hills studded with the lush landscape kept green by all the rain, especially the soft afternoon mist.  Where else do you find giant green pine trees, palm trees and cactus all together in one spot? They make up just part of the 60 shades of green, as do the coffee “fincas” or farms that dot the hills as they stand in the shadows of Volcan Baru, the extinct volcano that looms large above the town. While the hills are green there are explosions of color at every house with flowers everywhere – after all Boquete means bouquet.
85 degrees F for a high and an average of 65 degrees F at night is not a bad way to live – no heat or air conditioning needed but with 200 inches of rain a year, you do need an umbrella.
But if you’re wondering about the seduction part, this is how it happened:
I got up early one day and walked around town, I looked up to see the pink tinged mountains as the sun came over the volcano, it was stunning.  Everyone I passed said “Buenas Dias” or just “buenas” – and everyone smiled when I answered them back in Spanish.  Everyone!  It was right then with this backdrop of lush, green beauty that I felt something whispering softly in my ear.
Then I met the Gringos or I should say the Giving Gringo’s because they never really stop giving. A nice climate AND giving, caring people?  Yes!  You see it's not only the ferocious beauty of the river which runs through the town but the river of kindness that captures the heart of people who come here.
I don’t know anything about real estate or starting a business or stockpiling gold or silver, but I do know what I like and I like what I see.
The woman who became my landlady is an organizer of something called, “Bid 4Boquete,” a United Way type organization but with a stronger heart. Bid4Boquete supports 11 different agencies which vastly improve the lives of those they touch. And it makes Boquete one of the best places in the world to live.
I met a woman who knits hats for newborn infants, another who sews blankets and takes them to indigenous families in the hills. I know a former marine who brings school supplies and protein for the 9 children of a man who is a quadriplegic who lives on a hill with no road and no car and just a jerry-rigged sling to get him up and down the steep incline.  I met a lot of people for whom Boquete means devoting a Sunday to the “Animales” clinic to spay and neuter hundreds of dogs and cats so they don’t starve to death.  Or those who spend their Saturday’s at the Handicapped Foundation teaching English or giving massages or just helping out.
This is the kind of community where Bid4Boquete puts Gringos and Panamanians together donating goods and services all year long for its big auction that supplies the grant money that does so much for so many here.  And so it was much more than the weather and the beautiful flowers that stole my soul and seduced me, it was the soft whisper that said, “This is a good place to live, no, a great place to live, and these are good people.”  They seem to live by the old adage: “to those whom much has been given, much is expected.” I like that. And so, from Bid4Boquete to all its supported agencies and beyond, it is the open hearts that abound here that make this a vibrant, vital community I’m proud to call home.

Next My life in Panama so far...