We are here, because we aren't all there. 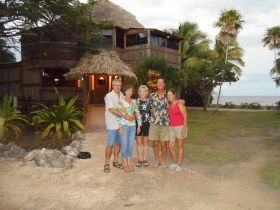 The diagnosis of our affliction was there for all to see. They should have seen it coming. After our first trip to Belize in 1999, something changed in our lives. We'd been many places in the Caribbean, but there was something about this country that was different.
It would be easy to say it was the English speaking aspect of the country. While a part of it, that wasn't it, not totally. The friendly people, and the, well, quirkiness of the country, the small town feel, just appealed to us. We continued to travel to other places, but we always came back to Belize.
After vacationing on the islands, we began to look around.  We'd ruled out "island life" for us. My good friend, born in Belize and raised in Chicago, who owned the hotel we frequented on the islands, had some ideas. We looked at a couple of them. Then, one Sunday, on a whim, we drove to a far off, off the beaten path place. Consejo, Belize, in the Corozal District. Think Fort Myers, Florida on a very small scale in the 1950's. 7 miles up a graded gravel road.
A few months later, we bought lots in Consejo with our friends from the island. The 10 year plan was in place. That went by the wayside in a hurry, house built in two years, moved to Belize full time two years after that. When we announced the decision to everyone, the diagnosis was unanimous. We'd certifiably lost our minds.
So going on 6 years, I admit, we were crazy. Crazy to have dreams, follow them, and make our dreams reality. It was not easy. We left behind friends and family, the hardest part of it all. But we decided, this was our life, and we were going to live it as we saw best. We never asked for their blessing or approval. We knew they thought we were crazy anyway. But, we go back, they visit, and we have new, and in some cases, better friends. Other dreamers like us who chucked it, threw caution to the wind, and chased the dream.
But, there is a cautionary tale here. It isn't for everybody. You get it, or you don't. Belize is a "boutique" destination. Take the time and do the diligence you need to figure out if Belize works for you. It took us YEARS to come to the decision. Some get there sooner, some longer. You will know when you know, one way or the other. I would never paint Belize as a perfect place. It isn't. A  friend of mine told me years ago, "Belize is Paradise, but it isn't Heaven". I've never forgotten it. And trust me, he was right. But with that said, I accept the quirks, and the nuances of life here. And overwhelmingly, Belize works for my wife and I.
"We are here, because we aren't all there", a guy said over a few beers a few years back. I realized instantly the wisdom of the words, and the truth behind them. It takes someone a little bit nuts to chase their dreams the way all expats do, here, or elsewhere. But, I think we wear it as a badge of honor, to be a little nuts, to step outside the box that is life, and go after our dreams in far away places. As I see it, I'm not that different from my ancestors. Some of them took tremendous risks to go off to far away places and chase their dreams. True, most of them were young and penniless, and had few choices but to take the big gamble that was America.
My situation, is well, different. But it's my rationalization, and I'm sticking to it.
(Pictured: L-R Tom Fisher, his wife Terri, Mischelle Williams, visitor from Atlanta, Perry and Mischelle Chow, at Smuggler's Den, Consejo, Belize)