What are the outdoor activities in and around Cayo, Belize, including San Ignacio and Belmopan? 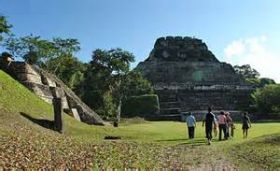 We have a famous cave in the Cayo district located called “ATM”, which stands for Actun Tunichil Muknal. Then you also have other caves up in the Pine Ridge area as well. You have to be an adventurous person to go to the caves because you'll have to swim in or sometimes you have to creep in very small areas. You might see crystals in the caves, skeletal remains of the Mayan people, etc. I haven’t been there personally, but it's on my to-do list.

In the San Ignacio town itself, we have a ruin just minutes from the downtown area called the Cahal Pech in San Ignacio. There is also a resort next to it. Then a few miles from San Ignacio we have the Xunantunich Ruins, which is closer to the Guatemalan border. Sunantunich means “maiden of the rock” or “storm woman” in Maya. Xunantunich is just located a couple miles from San Ignacio town. You take a ferry across to get to it, two miles out, in San Jose Succotz. I have been to the ruins many times. I enjoy going there. It's good for a day to get away, even just to have a picnic in the grass nearby the ruins. There are monkeys around there, too. It's good to get away for a day, even for a couple of hours.

The swimming in the Cayo area is good. We have three rivers. We have the Macal River, which comes from down from the mountains. It runs through San Ignacio and Santa Elena and that joins up with the Mopan River, which comes from Guatemala.  They both meet up in Branchmouth, which is a little get-together area where you could go and swim. It's very popular and it’s not far from San Ignacio town as well. The Macal River and the Mopan River meet there to join the Belize River, which goes all the way to Belize City to join the Caribbean Sea.

Most locals and expats go down to the Macal River to swim, which is down at the wooden bridge. The wooden bridge is what separates Santa Elena and San Ignacio, which are the main tourist destinations in the Cayo District. Other than that, you can take a pontoon boat up river. You could go canoeing up river and then you just jump out of your boat and go swimming. The swimming is good. The river is not polluted and it's very safe. I enjoy swimming there. I go the Branch Mouth to swim in the Mopan River as well. You can also go the Sunantunich Mayan ruin where the Mopan River passes by to swim as well. You can go kayaking on the river. A lot of people do it but I haven't done it yet. I have done canoeing. You can do both kayaking and canoeing here in Cayo.  Most people do river tubing. They would just take an inner tube from a tire and blow it up. They just float down the river on their inner tubes. It goes to one place and someone picks them up at the end or you can just go in by yourself and come off where you want.

The San Ignacio market is very popular. It's open every day but the main day is Saturday, which is when you will get the locals and the expats and everybody coming out. You get your fresh fruits and vegetables. You also get different kinds of food. It's a big event on Saturdays every week. They are open every day and it is for everyone.
(Xunantunich Ruins, Belize, pictured.)
Posted August 13, 2015