Some of you know that Chili Cookoffs are a tradition....not only from the south part of the United States (where my wife and I hail from) but all over now.  Only national contests for the best cheese steak sandwiches, pizza, or Bar-B-Que match the competition of a good Cookoff.   So it was a natural step for expats in Nicaragua to hold a contest for the best tasting chili.
Over 200 people paid $10/head for entrance (and a special spoon) to get small cups of chili from over a dozen competitors.  Held at Reilly's Pub in Granada, Puedo Leer ("I can read") Libraries are a community service started by several North Americans living in Granada.  My friend Darrell Bushnell made sure we had invitations to come to Granada, and partake in the tasting. 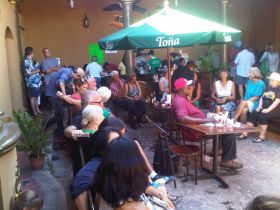 In addition to the chili, there were cold brewskies from Reilly's, and the owner had a big grin on his face as he (almost) ran completely out just as the event closed for the day.  Music was provided, and everyone had a great time.
There were raffles and door prizes.  My wife Denise won 4 free art lessons from Amy Bushnell, and one lady won an appetizer and a margarita from one of the local restaurants.....sorry, not one, but ONE PER WEEK FOR THE REST OF HER LIFE....AND SHE WAS A VERY YOUNG WOMAN!!!!
Darrell told me that this was the 4th event, and they raised about 10 times the amount for the library than Cookoff #1.  $2000 plus will go a long way to bring the joy of reading books and novels to the local Nicaraguan populace, both young and more mature.  Also, there is room for more donations (if you are looking for a good place to park some discretionary funds), and you can mark your calendar for an even bigger event next year.    It's always held the last weekend in January, and is an ever-growing social event not only for Granada, but for the friends of Puedo Leer across Nicaragua.  Contact me if you have books to donate, or if you have an interest in a contribution to this fine work.