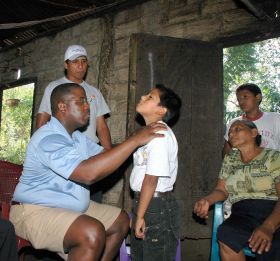 Editor’s note: Mike Cobb is the CEO of ECI Development, which, among other developments overseas, created Gran Pacifica, a master planned community being built on 2,500 acres along more than 3 miles of beachfront due west of Managua, Nicaragua.  In this story, Mike tells us how his business partner, Joel Nagel, and the Pittsburgh Rotary Club, brought others together to launch several health clinics that today bring much-needed primary care to the people of Nicaragua. The most recent clinic just broke ground.

When people come to Nicaragua, they see what real poverty is and the lack of services. Having lived here for almost 14 years now, I start my prayers every day with a long gratitude list. One item I include could encompass many others: abundance.  I say the word “abundance” and then I list things that fall into that category.

In North America we are so blessed with abundance that we take so much for granted. We don’t know what it would be like to live 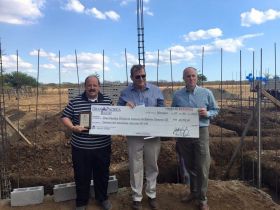 without clean running water, shelter from the elements, consistent access to food, and these kinds of things until we visit a country like Nicaragua and you see people living without.  And on top of that you think, “My goodness.  These people don’t have even simple basic medical care to be able to get a check-up, to be able to get their teeth examined, to be able to get an x-ray if they hurt themselves.”  These things aren’t rocket science, and this isn’t advanced medicine.  This is very basic medical stuff and to imagine living without it is just hard for a lot of North Americans to do.  So when North Americans visit, they see how easy it would be to make a big difference.

We talk about what makes people donate.  People donate money because it’s easy and we can do it from far away. But the number of people who actually want to roll up their sleeves and get their hands dirty blows me away. As an example, Dr. Lori Glaser-Zakem, who lives in 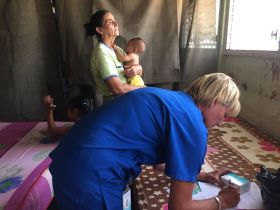 Cincinnati, was here working in the local community for almost three months.  She has big heart.  All the people who come here give of themselves in ways that are meaningful to them. It’s time, not just the money; it’s money and time.  And when you can get both of those together, you get a powerful combination that creates sustainability, which is vital, so that these clinics don’t just get started and abandoned, but are able to maintain providing service to their communities into the future.

In 1990, when Doña Violeta Chamorro became president of Nicaragua, George Bush was president of the United States.  As part of a commitment by President Bush to help President Chamorro revitalize the economy in Nicaragua, President Bush invited business people from around the US to go to Nicaragua.  In Pittsburgh, one of the people contacted was my friend and business partner, Joel Nagel. At the time, Joel was a very young lawyer who wound up coming to Nicaragua with a bunch of seasoned business professionals from Pittsburgh to meet 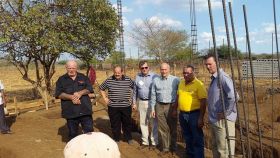 with President Chamorro and ministers in the Nicaraguan government.

Upon returning to Pittsburg Joel said to himself, “I’m a lawyer; I’m not really in business per se, so I don’t have a lot to offer on that side of things right now, but I could certainly help raise money for some health facilities in Nicaragua.” Joel was, and still is, a member of the Pittsburgh Rotary Club, so he turned to his fellow Rotarians and headed up a big fund raising effort.  Due to the generosity and hard work of Joel and his fellow Pittsburgh Rotarians, after several years of effort, they raised enough to build the very first Roberto Clemente Health Clinic in a little town in the north of Nicaragua called La Reforma. 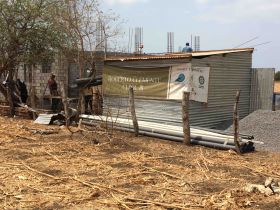 Pacifica. A few years later, one of our local competitors, Rancho Santana, wanted to build a health clinic as well, and knowing the story of the clinic in La Reforma, asked if we could help them to build one in their area.  Unsurprisingly, the Pittsburgh Rotary Club was again up to the task, and agreed to help. The Club helped raise money, contributed the technical expertise and the architectural plans, and as a result of their hard work and the work of others, the second Roberto Clemente Memorial Health Clinic was opened in Nicaragua, this time in the town of Tola.

We have always wanted to have a health clinic to serve folks in and around the location of Gran Pacifica, in the Villa el Carmen municipality.  Last year, again with the help Karl Ohrman and the Pittsburgh Rotary Club, we raised the money and Gran Pacifica donated the land just outside of our gates.  We’re now under construction, with a finish date sometime in mid- to late-fall.

We’ve got a bunch of volunteers lined up, including a several doctors who committed to coming down help from time to time.  We are fortunate to have the help of Travel to Do Good, a group headed by Roslyn Parker, who brings “voluntourism groups”. We’ve got really incredible support from Robert Morris University, most especially Dr. Carl Ross. Dr. Ross had been down here almost 100 times in the last 15 years. He brings groups of nursing students who do a ten-day rotation; part of which is in Managua, and part of which is out in the countryside.   We receive support in the form of everything from financial and equipment donations, to staffing and service; volunteers to “carry it forward” and make these clinics sustainable long into the future, which the most important part.  Among the many people and organizations that have helped organize the clinic is Patrick Hiebert, who runs our rental and property management services at Gran Pacifica and who has a foundation in Canada called Help Them Help Themselves.

The clinic at Gran Pacifica will provide very basic health services. Given the poverty here, providing just these basic services creates complicated trade-offs.  For example, we may diagnose a disease and prescribe medicine to treat it that has to be refrigerated, but the patient doesn’t have a refrigerator.  These are the kinds of challenges that people face when they run a clinic in Nicaragua. That’s why we are trying to do our part to address these problems by providing commercial opportunity. Gran Pacifica is the largest private full-time cash economy employer in our municipality, providing jobs and income to hundreds of under- and unemployed Nicaraguans.

The story of Elkin, a Nicaraguan boy, helps to illustrate another way we can help.  Elkin was playing in a tree, fell on a fence, poked a hole in his throat and was being taken care of by the local healthcare system.  At the same time, Dr. Carl Ross and some Gran Pacifica shareholders were seeing where they could help out. Basically the local doctors had inserted the best straight tube they could figure out how to put in for Elkin, but it wasn’t being cleaned or taken care of properly and as a result, Elkin was suffering. Also, given his injury, Elkin wasn’t able to go to school.  At that time, we had a foundation, which was working with Dr. Ross, Mark Miner and some others in Pittsburg, who put together a program to get Elkin to Pittsburg, along with his grandmother, where he received proper medical attention.

When Elkin returned back to Nicaragua, he continued healing, and was able to go to school.  All this may sound simple, but consider for a moment what Elkin’s life would have been like if we hadn’t helped him. Elkin has been an absolute and incredible success story of turning one’s life around in Villa El Carmen because the volunteers were there, we were there, and we had the network in place to be able to help Elkin. We’re going to see a lot more stories like Elkin’s. At the present, Dr. Lori is working with a young girl who has a congenital heart malformation which causes her shortness of breath.  Unfortunately, she’s been deemed inoperable because of all the lung damage and Dr. Lori is currently getting Make a Wish International involved.  It’s all good stuff; it’s wonderful to be able to help.  Yet it’s heartbreaking because we can’t help everyone who needs it, but it’s just heartwarming when you can make a difference for the ones who you can help. It’s bittersweet, but we’ll take the sweet and accept the bitter.

Pictures, from top to bottom:
If you would like to volunteer (and you don’t have to be a medical professional), contact Roslyn Parker at Travel To Do Good or Patrick Hiebert for onsite participation.   For monetary donations make a check out to the Pittsburg Rotary Club Foundation, and put “Gran Pacifica Roberto Clemente Memorial Health Clinic III” in the notes.