Cave Man and the Woman who Climbed Everest 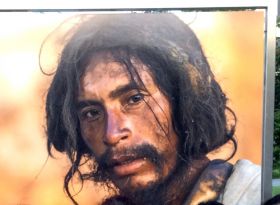 Here are two contrasting characters who have crossed our path in the neighborhood. One is well-known for being homeless and without possessions, the other well-known for being the first woman from Central America and from Guatemala to plant the country’s flag on top of Mount Everest. Andrea Cardona’s story is available for anyone to read on the internet, but our connection to her is told here. The only ones who know of Cave Man’s notoriety live around this area. He can be spotted along the road between Antigua and El Hato, or in Antigua itself. He is mainly memorable as someone who is quite dirty with beard and hair matted in what looks like dreadlocks, who does not talk to people, and does not bathe or change his clothes very often.
We first discovered Cave Man living at the edge of El Hato, the town below us about a mile. It is an indigenous community that is doing very well, by standards of living of the many indigenous villages throughout Guatemala. It has taken us time to find out more about Cave Man, but at first we saw him living beside the road in a small cave that was only about a meter deep. It was created by natural caving in of the soil, but it offered the man some protection from the overhang. He had a few piles of dirty clothes along the front edge of the cave, and there was no room for anything more than his body, curled up to sleep. He didn’t have anything else to keep in the cave, and even though he didn’t plan to clean those clothes or wear them any more, he also didn’t care to dispose of them. The piles of clothes acted as sort of a boundary, walling off his abode.
One day as I was passing the cave when Cave Man was not home, I saw smoke rising from his clothes pile. I stopped my car on the hill and went closer to check. I thought the clothes might be important to him, so I felt obliged to save them. I found a long stick and climbed up the embankment to pull the ones not yet burned away from those that were smoldering. I could only wonder how the fire started, whether some children nearby did it on purpose, or if the fire started from spontaneous combustion. I knew that Cave Man rarely changed his clothes, so it was hard to say how long the piles had sat there, accumulating gases of leftover body oils, warming up in the direct sun. I encountered the smell of his dirty clothes one day in Antigua when I passed him on the narrow sidewalk; it was overpowering.
This free-spirited and unselfconscious person is not governed by any social conventions. When he is tired and wants to rest he stands in the middle of the road, silent and still, staring straight ahead. When he needs to urinate he does so in the middle of the road as well. Most travelers know of him, so they just drive around him, and for the most part, no body bothers him.
Sometimes when we drove by in early morning he would be standing up in front of the cave, and I joked that he was starting his “salutations to the sun,” a yoga posture of stillness at the dawn of day. Other times we would see him already down in the center of El Hato, sitting in a rock where the sun would first land on him, warming him after a cold night. Or, we would see him walking the four miles to Antigua, which he still does every single day, to find food opening bags at the refuse station (the dump). Coming back from Antigua, in the afternoons, we would often see him heading back to his cave. I haven’t ever seen him talk to anyone, but once it looked like he was talking to a wall. One of our friends (an acclaimed Austrian photographer, Manfred Scheucher) spoke to Cave Man when he stopped to ask if he could take his picture. He agreed, but I don’t actually know if he spoke or just nodded his head. My unconfirmed conclusion is that Cave Man has a thinking disorder often called schizophrenia. 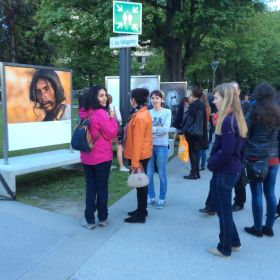 Locals have told us he has family in El Hato. One said he has a brother and a sister, and that their parents owned land and a house in the town.  Another said his cave was on the land owned by the family. The parents are deceased, and the siblings have been unsuccessful at helping him or getting him to live in the house. The cave has now deteriorated to the point that Cave Man can no longer find shelter under the overhang. It seems he took to sleeping in the center of town where there is a covered bench for people waiting for the bus.
Cave Man is only about 5 feet tall. Without facial hair he looks much younger, and we estimate his age to be about 30. Almost everything he has worn has been too big for him, including shoes. We knew he occasionally found his clothes at the dump. One sweatshirt he wore for months said “Walker” on the back of it. We laughed at the irony of it. There was a period when every time we saw Cave Man walking to town he was holding on to his pants with one hand. They were so big the pants would fall down if he didn’t hold them. Zaqueo was getting himself a new belt so I suggested we throw his old one into the cave for the poor guy. We did that, but for months afterward he still held onto his same pants with one hand. Maybe he didn’t know how to use it.
Once he had some very big boots, way too big for his tiny feet. Not long after he got them I saw that Cave Man was limping. Then I saw him in the center of El Hato with one boot off and thought how easily he could die of infection. But his foot healed. He also found a huge, very warm coat that he kept on his body for at least a year, with other clothes layered under it.  Sometimes in his walk up the hill he was too warm, so the coat would be hanging half way down his arms, but he never took it off. Since the cave caved in, he has started carrying a huge plastic bag with him, dragging it along behind him. At least he didn’t have to use one hand to hold up his pants any more. About a year ago we saw him suddenly a changed man. He had somehow injured one eye and someone took him to a clinic. There they cleaned him up, shaved off his hair and beard, dosed him with antibiotics, put clean clothes on him and released him back into the wild. He looked really good all cleaned up, even more frisky, kind of like after you give your dog a bath. At least I feel that way after being grubby and I get showered.
One Christmas holiday my grandsons came to visit from Colorado. They learned the story of what we knew about Cave Man and they spotted him on his daily walk to town. On Christmas Eve day I found my grandson Ben in the kitchen, putting things in a box and asked what he was doing. He was making a gift of fruit and snacks for Cave Man and wanted Zaqueo to drive him down the hill to the cave where he would leave it. When they got there they decided to tie the box up in the tree so no dogs would get the gift before Cave Man did. Unfortunately, as they drove away they observed some little boys in the rear view mirror, climbing up and taking the box. Ben was sad about it, but I reminded him it was Christmas for the little boys as well, and he could be comforted to know he made them happy instead.
Merry Christmas and Happy Holidays to One and All! 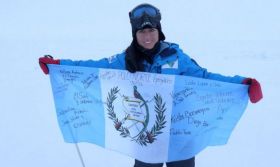 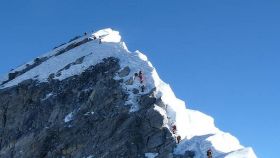 Now for Andrea Cardona. Shortly after Zaqueo and I started our bed and breakfast here at Ojo de la Mariposa B&B we got a reservation by a Guatemalteca by that name. I had never heard of her, but she was a friend of my lawyer who referred her. Andrea arrived here with a very handsome companion who said he was from Colombia, and she herself was very attractive. Both were charming, pleasant people who always wore fitted lycra clothes and looked healthy and athletic. They brought some food with them that also looked very healthy and only ate the fresh fruit and eggs I offered them for breakfast. They wanted to go up the famous hill in front of our house to explore the area, and I noticed that they sprinted up the hill. Most people who walk up it go very slowly, the least fit of them doing a lot of huffing and puffing and stopping to rest. But not this couple. It looked like to them it was no worse than level ground. And we are at altitude here, starting at 7250 feet (2200 meters). 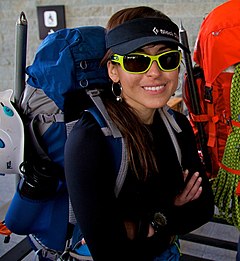 I had chatted with them and learned that Andrea Cardona had a business selling healthy skin care creams, and that David Henao is a film maker who does travel films of sports and adventures. After they left I sat down to enter their emails in my log and was curious to check the website Andrea had connected with her email. That was how I found out her history, and David’s as well. They had somehow met and he had made a few videos for her, and of her, about her major accomplishment to conquer Mount Everest, 8,848 meters above sea level. Both of them were so modest they never revealed this to me while here.
Not only did Andrea climb Mount Everest, she has also completed the challenge of the three poles of the planet, skiing 111.11 kilometers to the geographic North Pole in the Arctic Ocean, and in Antarctica skiing another 111.11 kilometers (equivalent to a terrestrial latitude) in a week, placing for the first time in history, the flag of Guatemala at the geographic South Pole. This constitutes “The seven highest peaks on each continent,” "The Three Poles Challenge Planet" and “Explorers Grand Slam.” I think about Andrea every time I climb our hill, huffing and puffing at 72 years old, but at least I don’t stop to rest. 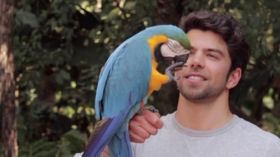 As for David Henao, he made a video with Andrea of the two of them making a climb of our nearby Volcan Pacaya to instruct how to make such a climb safely. This is a very popular tour amongst tourists to our area which you can do in a few hours, toasting marshmellows over fumeroles at the top of the climb. Some get “lucky” to see lava and hot rocks flying through the air, but to me it seems insane to climb an active volcano when there is no warning whatsoever that it may turn fully active at any moment, as it did in 2014. And Happy New Year to all as well!

Next HOW I CAME TO MARRY A YOUNG GUATEMALTECO - Part 3