Our move from Puerto Vallarta to Ajijic, Lake Chapala Mexico. 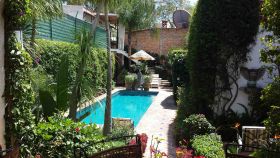 Originally from Northern Ireland, and after a 10 year stint of working in the cruise industry and traveling extensively, I decided it was time to settle somewhere and find a "grown-up job"!
I decided on Puerto Vallarta in Mexico. I moved there with little more than two months rent in my pocket and a dream which I was aware would need a lot of luck and hard work to achieve. I arrived in October and was immediately drawn to the climate and the beauty and began a career in real estate. Through daring and a "gift of the gab" as we say in Ireland I managed to survive my first season and then winter time came to an end and I really wasn't expecting the humidity that summer would bring. For an Irish guy it was a struggle, but struggle I had to do as finances were not available to make any changes and I did bear with it, actually for four years and then with a little more money in my pocket and a partner of three years I began to look for somewhere else. 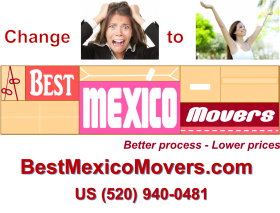 On a visit to Guadalajara, we asked the receptionist at the hotel where we could go for a day trip and she suggested as we had a car we should go and check out Ajijic, a little lakeside village nestled on the shores of Lake Chapala. We did, and within about 4 hours we were hooked! We loved the weather, we loved the friendly attitude of both foreigners and locals and we also loved the cost of living in comparison to Puerto Vallarta. We visited again a few weeks later to begin a search for a home and discovered a beautiful property which we decided that if we could buy it, we would also need to make a living out of it as well, and thus began the dream of Casa Flores B&B (pictured) just a few blocks from the village plaza. We closed on the property in February 2008 and had 14 days to take what was then a 5 bedroom property from being an empty unfurnished home to a B&B quality furnished dream, and somehow we managed it.
Our new life quickly became all we imagined it could be and more. We were immediately accepted into the community with open arms and were quickly immersed in a large social scene which we had never imagined would exist in this little village. In fact, so much so that we were actually turning down invitations just to have one night at home. There was certainly no chance of being bored, which was what our friends in Puerto Vallarta had thought would happen. Through our contacts we became actively involved with several charities which with a now thriving business which we had increased to nine rooms, we were able to contribute to. The first was Villa Infantil Orphanage which was run by five nuns and who we knew were in dire need of help. We donated money monthly and also became involved in food deliveries as the operation was almost entirely dependent on donations. We also became involved with the School for Special Needs Children and again tried to help monthly and also had treated all the kids to a movie in the local cinema at Christmas. 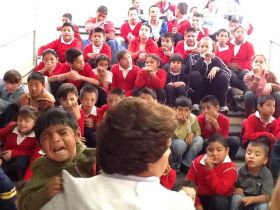 Many of these kids are from poorer backgrounds and would rarely have the chance to see a movie and to see the joy on their faces was amazing, even if the little boy at the front left of the photo doesn't look overly impressed!!
Our life has been so enriched by our move and our time here. The village is rated as having the second best climate in the world for all year round living and the cost of living is wonderful. We eat out most nights, simply because the expense of doing so allows that. As I said before the social life is also active and the Lake Chapala Society in the village has all sorts of clubs available and also a DVD and book library etc.
One of the advantages is also having a large city 45 minutes away to where we can go for our city "fix" and also stock up on certain items from the likes of Costco etc. and even though we have an active theater and concert scene in our village there is always something to go and see in Guadalajara as well. Our lives could not be any fuller with regards to friends and entertainment and the local people here are among the friendliest you can meet anywhere. Ajijic has been marketed largely as a retirement destination, but don't think that that means you will have nothing to do. Far from it. 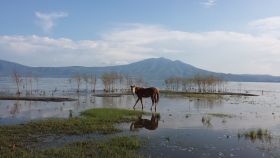 The area has a natural beauty that is hard to rival and exercising here is a little easier when you see the beauty of the walking trails. With very low crime, where people think nothing of walking home alone and kids walk to school in the morning we really do believe that we have found our own little piece of paradise here. After a few years of living here I decided it was time to get into the real estate world again, and that I did. It has been wonderful through the B&B to be part of others beginning their love affair with Ajijic and to also in many cases be involved with their home purchase. We are passionate about this place and have shared it with so many others who are now here full time and like ourselves have also gotten involved in other charities and causes. We would highly recommend this area as a retirement destination, as for us, it has it all!
Moving to Mexico?  If so, check out Best Mexico Movers.