Are there islands in Nicaragua? If so, where, and what are they like? 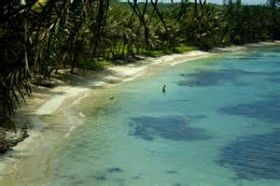 I have been to the Little Corn Islands and it is the most amazing place ever. It has turquoise water and white sand. There is no power during the...

I have been to the Little Corn Islands and it is the most amazing place ever. It has turquoise water and white sand. There is no power during the day so you walk everywhere.  There is no need for cars because it is so small that you can literally walk throughout the whole island. They are also very strict with rain water. You are not allowed to waste rain water because they collect it for drinking. They also have these really cool houses made out of old Coca-Cola bottles. They cannot afford to have trash on their island so they do not waste anything. The skylights that they make out of the old bottles are amazing.

We go diving and snorkeling, both of which is amazing. It is better than looking at the Long Beach Aquarium in California. There is no pollution in Little Corn. The reefs are pristine and it has an unfathomable amount of sea life there. You will see all kinds of fishes. I have been swimming with sharks there. It’s heaven. I have snorkeled in other places in the world but Little Corn is the best.

There are also islands on the Pacific side called isletas. They are on the lagoon and you can also go there. You can rent a house or stay in a hotel on the islands. Overall, there is about over three hundred islands in Nicaragua. The joke is that when the volcano in Nicaragua erupted, it made one volcano for everyday of the year. You can go on tours and see all these islands. You will see mansions there because some people bought the islands and built their mansions on them. Some of the islands are really big and some of them are really very small. Some of them have houses and they have jungle all around them. One of the islands here in Nicaragua is really famous because it is inhabited, but only by monkeys. There are a lot of different monkeys on that island. The reason they are there is because a veterinarian owns that island and he rescues monkeys. Some people in Nicaragua have monkeys as pets but they do not know what to do with them because they are wild so he treats them and then he liberates them on his island.

There are also some islands that are uninhabited by anybody. They are just jungles. They are usually the smaller islands that nobody can build on but you can take a boat and have a picnic on the islands. For the islands that are inhabited, you can also explore if they let you. There are a lot of locals there, too. There are people who were actually born on those islands. Their grandparents moved there and generations have been born there. You will see them fish. They’d be standing close to the island but they’ll be on the water fishing. Some of them have sold their pieces of the island to wealthy people but they decided to stay there. You can hang out with the locals on the islands. I find them really cool. If you talk to them really respectfully and you’re genuinely curious about their lifestyle, they would even invite you to their house and they will show you the ropes on how to be an islander. I have been really nosey and I have asked.

One time we were in a boat ride with my family and I asked a guy if he’s from there and he said yes. I asked him what it’s like to live there and he asked if we wanted to come to his house. So we got out and he showed us his home, his family, etc. We asked him to teach us how to fish and he did. He also showed us how they make the nets, which is pretty cool. He actually asked us to have lunch at his house and eat the fish that we caught, which we declined because I didn’t want to eat something that they could eat for probably a few more meals. They need it more. It is really not appropriate that we eat at these people’s houses when they don’t have much. So we told them they could keep our fish. The experience was priceless. Meeting them was priceless. So literally, we had no reason to take more from them because they gave us a lot already. Every time we go out there and we see him in the little pangas or little boats, we always say hi. It’s pretty cool. You can also go swimming out there. They gave me a water lily to take home, too. It is sweet. These are things that you will start noticing when you start living in Nicaragua. You will realize that there are intangible things that are way more valuable than material items.
(Beach on Little Corn Island, Nicaragua, pictured.)
Posted April 28, 2016 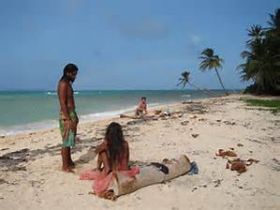 We have a bunch of little islands in Granada where you can go by car. Once you get to Granada, you can take a little boat going around the different islets on Lake Nicaragua the whole day.
You can also go to Ometepe Island, in Rivas, which is a city that’s little bit farther from Managua. Ometepe is a big island where you can go on a bigger boat or on a ferry with your car and you can spend a weekend or a couple of days on the island. It’s a...

We have a bunch of little islands in Granada where you can go by car. Once you get to Granada, you can take a little boat going around the different islets on Lake Nicaragua the whole day.
You can also go to Ometepe Island, in Rivas, which is a city that’s little bit farther from Managua. Ometepe is a big island where you can go on a bigger boat or on a ferry with your car and you can spend a weekend or a couple of days on the island. It’s a very nice place to go with nice hotels and different activities. Ometepe is an island on a big volcano that has been extinct for the last 300 years. The island was formed after the eruptions of two volcanoes around it. These islands are all on the Pacific Coast and they are in the lakes and not on the ocean.
When you move to the Atlantic Coast or the Caribbean, you will find Corn Island and Little Corn Island, which are both nice and beautiful islands. If you want to get away from the noise and be in nature to enjoy clear waters and white sand, these islands are very peaceful places to go. Corn Island, which is the bigger island, is 30 minutes away by boat from Little Corn Island.
(Little Corn Island, Nicaragua, pictured.)
Posted November 13, 2016