What are the holidays of Nicaragua? 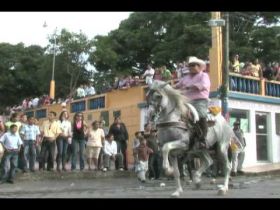 Christmas and Holy Week are considered national holidays in Nicaragua.
Semana Santa or Holy Week is one of the biggest holidays in Nicaragua. People take two weeks off from work and celebrate by drinking a lot of alcohol. Every city in Nicaragua like Managua, Masaya, and Granada would have their own form of weeklong celebration for Semana Santa.
Christmas, celebrated on December 25 is another big holiday for Nicaraguans.
Local holidays are church-influenced because every church tradition and holiday is celebrated, such as days for specific saints like the patron saints of Managua and Matagalpa. Each city would have their own church-related holidays.
There is also the hipicos (horse parades), which is also a big celebration for Nicaragua and every city would have its own horse parade week. Rich people would show off their horses and carriages. People also celebrate this holiday by drinking a lot of alcohol. This holiday has Spanish origins from the 1800s.
During the hipicos, locals dress up like a cowboy. Some people would ride their horses and parade them in the middle of the street and other people would walk on the sidewalks to see the animals. There will also be stalls on sidewalks selling food and alcohol while very loud music plays in the background. Streets are blocked, there is no traffic, and everyone is just walking. It is very fun. This is like the celebration in Texas where they also have horse parades.
(A rider in a horse parade, a hipico, Nicaragua, pictured.)
Posted July 28, 2017