What's the cost of living in Nicaragua?

The cost of living in Nicaragua is very low. I tell people that a retiree, a husband and wife, or partners, can retire in Nicaragua comfortably for about US $2,500 per month.

With a budget of $2,500, utilities and food will all be paid for and they would live very...
The cost of living in Nicaragua is very low. I tell people that a retiree, a husband and wife, or partners, can retire in Nicaragua comfortably for about US $2,500 per month.

With a budget of $2,500, utilities and food will all be paid for and they would live very comfortably.
(Street in beach town of Playa Montelimar in Nicaragua, pictured.)
Posted August 6, 2015

It’s been three and a half years since we were renters in a barrio called Linda Vista, in Jinotega.  When we were renting, the rent started about US $150 a month for a two bedroom, one bathroom house. The home was tiled and it was decent, sturdy construction. The only fault I had was with the design of the roof. It leaked quite a bit during the rainy season.  By the time we finished renting, our rent went up to  $200 a month.

It seems that the rents vary depending on what the landlord thinks they can get from you when they see you the first time. If you have a Nicaraguan doing the inquiries for you, you'll hear a lower price.  However, if you do the inquiry, they'll look at you and judge you by your shoes, your clothing and see how much more can they get from you. It's not beneficial to dress up the first time you're meeting someone who's going to be charging you for something here in Nicaragua. As an example, friends of mine were renting a house that was about the same as we were in, except that they had more problems and they were paying $400 - $500 a month.  So your cost for rent can vary all over the place, depending on what the owner thinks they can get from you.

Jinotega is in the northern part of Nicaragua, in the mountains. We're about 28 miles from Matagalpa. This is amongst more Nicaraguans and not an expat area.  We were here about 4 years before we felt comfortable enough with the culture, knew enough to avoid the scams, and did enough research and had enough experience to know the best prices of land, to buy our own property.  That’s when we decided to purchase property and build our house on it, because a lot of the houses we looked at just didn’t come to standards for the prices they were asking that we could achieve if we purchased the land and built our own house.

Fortunately, here in Nicaragua, electricity is on a stepped scale. The more wattage you use, the more you pay.  They have a break point at 150 kilowatts per month. When you hit that, it doubles your bill automatically with the first watt over that.  If you go over 150 kilowatts in a month, you could get a very expensive bill. Our electricity bill usually runs around $25 a month. But when I go over 150 kilowatts in a month, even by just 1 or 2 watts, your bill will double to $50.

For water, we're charged a flat rate per square meter of water that we use, and the bill come to about $4 a month. We don’t have a sewer; I've got a septic tank.

Property tax laws have changed recently. Last year, I paid $45 property tax for the new house we just constructed. Until I sell the house, they charge me property tax based on the price I paid for the land; they haven't come out and assessed the house. When I sell, that will assess the new property and someone's going to be hit with a property tax bill in the area of $150 - $200 a year. It's not like in the States.
(Ferns and other plants growing out of the sod wall and roof in Matagalpa, Nicaragua, pictured.)
Posted August 7, 2015 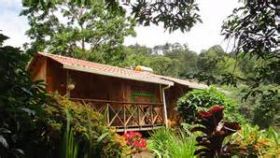 The cost of living in Nicaragua depends on your lifestyle. When I moved here, I thought about it and asked myself what kind of life I wanted to live. There are people who come here and want to live like the backpacker; eco-style. More power to them. They have significantly less cost than everybody else. Then you have people who come here to retire and some of them have the mentality where they want to live like they do in the States but they are open to being more “Nica (following...

The cost of living in Nicaragua depends on your lifestyle. When I moved here, I thought about it and asked myself what kind of life I wanted to live. There are people who come here and want to live like the backpacker; eco-style. More power to them. They have significantly less cost than everybody else. Then you have people who come here to retire and some of them have the mentality where they want to live like they do in the States but they are open to being more “Nica (following the Nicaraguan lifestyle).” Then there are people who move here because they are either embassy families or they came here to start a business but have no plans of living here forever but they are planning of being here for at least 10 years. These people tend to have a more upscale kind of lifestyle. For example, they work for the UN or a big non-profit, and they have a pretty luxurious life here. If you are an embassy family or if you’re here from the US but you’re doing any kind of mission, they have such a nice kicked back life because usually their jobs pay for their homes, their guards to take care of the homes, their drivers, their cars, etc. They have a different lifestyle. They have their own paycheck that they can use to do things like travel, and eat. This group of people probably spends at least $10,000 a month because they live a really good life, they have several employees, etc.

Then there are people who come here to retire. From what I’ve heard from patients of mine, they live off of their retirement money or the pension they get. They make it work. They usually have their little home, which is either rented or owned. If they are expats and they came here with the idea of living here, they usually buy a house and they adjust themselves to the Nicaraguan lifestyle.

Then there are the eco people that are like backpackers. They are more inclined to try more native food so they are not looking to splurge on trying to make pho (Vietnamese noodles) at home or going out to eat at really nice places. They are more into the experience of being an actual native.

Utilities are expensive here in Nicaragua. Electricity is really expensive here and they charge you depending on the neighborhood in which you live.
(La Bastilla Ecolodge in a coffee plantation, Jinotega Nicaragua, pictured.)
Posted March 21, 2016 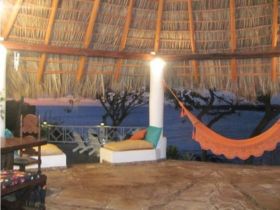 One of the main reasons I left San Diego in 2001 was the high cost of living. San Diego is probably one of the most expensive places to live in the US. The comparison between the cost of living in Nicaragua and in San Diego is huge. The cost of living in Nicaragua in general is only about a tenth of the cost of living in San Diego.
In Nicaragua, you can get a nice 2-bedroom rental house on the beach long term for around $500 a month. Food costs depend on how often you eat out. If you only ate at home, it would cost a couple of hundred dollars a month. If you eat out quite a lot, it would cost around $400-$500 a month. If you have a car, you have to add that on top of the housing and food costs. Some people use public transportation or bikes in Nicaragua, and that can significantly bring the cost of living down.
It is possible to live for less than $1,000 per month in Nicaragua, but if you have a car, eat out a lot, and like to travel to different tourist spots around Nicaragua, you’ll have to double that. For $12,000 a year, you can live on a low budget in Nicaragua. That would mean only eating at home and not having a vehicle for transportation. If you double that, you can have a fairly decent 4X4 vehicle to get you around where you need to go, and have time and money to travel. Everyone can have a good time in Nicaragua.
The rates mentioned above are for a single person. For a couple, you only have to add food since the rent and the vehicle costs will be the same. For a couple living in Nicaragua who love to travel around the country, $30,000 a year is enough, including living in a beach home in Nicaragua and having a decent vehicle that they can purchase and spread the cost over three years. Before I left San Diego, I was spending about the same amount that I spend now in Nicaragua, but I was living near the beach, as opposed to on the beach. If I lived on the beach in Northern Nicaragua, I would have paid ten times as much.
(Beachfront living in Northern Nicaragua, pictured.)
Posted March 27, 2017