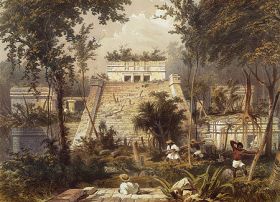 The culture of Yucatan is based on the Mayan culture. Mayans were great thinkers and were very creative. They are not warriors and that is their big difference from all the other people that were living in other parts of Mexico.

There is a big difference in the Aztec culture (which was located north of Yucatan, more towards the center of present day Mexico) and the Mayan culture (which in Mexico, exists mostly in the Yucatan peninsula and surrounding areas). The Aztecs were the...

The culture of Yucatan is based on the Mayan culture. Mayans were great thinkers and were very creative. They are not warriors and that is their big difference from all the other people that were living in other parts of Mexico.

There is a big difference in the Aztec culture (which was located north of Yucatan, more towards the center of present day Mexico) and the Mayan culture (which in Mexico, exists mostly in the Yucatan peninsula and surrounding areas). The Aztecs were the ruling culture in Mexico. They were warriors so they were strong and they were hard workers. The Mayans are more intellectual people. They were not warriors but they were more inclined to creativity. That is the profile of these two cultures. The Mayan culture disappeared and it is one of the great mysteries. Their biggest cities were abandoned but at the end, the feeling that people get when they come here is the same as when the Mayans were here. Mayans were and are known to be intelligent and nice people and they like to live life. They are not as hard workers as the Aztecs. The same thing happened in most other countries like the south of the US, where it is more relaxed and the north is more industrialized with more hard working people. It could also be because of the conditions that we face such as the nice weather in the Yucatan, which makes people relax a bit more.

The Yucatan was also very rich due to the henequen (the sisal fiber that we have here in the area), which is also called “green gold.” Huge amounts of money and fortune were made out of haciendas exporting henequen. So people here in the Merida area in the state of Yucatan used to travel and spend around 6 months in Europe. They used to go to doctors in Cuba or travel to the States before going to Mexico City because it was hard for them to go to Mexico City. As a result, the culture here is completely different from the rest of the country. It gives the Yucatan a different feel. Even the gastronomy is completely different here. Within the country of Mexico, Yucatan is considered as paradise. It is a very nice place to live, very nice place to visit, and it has a very nice quality of living. I think one of the mistakes that we have done so far is that we have not promoted the Yucatan actively outside of Mexico. It would have been easy for us because most of the country of Mexico already knows that Yucatan is a nice place to live in or to visit.

The culture of Yucatan is very alive.  You will find this in the ruins, which are incredible, and in the several elements in all the parts of Merida (the largest city in the Yucatan Peninsula, located in the state of Yucatan) that show you transition that this country experienced in so many ways. Just from the beginning, the type of the construction and buildings that the Spaniards brought, to the way emulated the French façades and the great buildings, which are really surprising. All these elements were brought into the society here. Merida was founded in 1542, so there are families that have been here for a very long time. They were very rich due to henequen. When you visit Yucatan, you will be very surprised to see all these elements together.

We now have the new elements, which are the modern parts of the city of Merida. We have a lot of shopping malls now and everything is now mixed together. That gives people a nice feeling when they visit.
(Depiction of ancient Mayan  ruins in Tulum, Yucatan, Mexico by Frederick Catherwood, pictured.)
Posted February 18, 2016 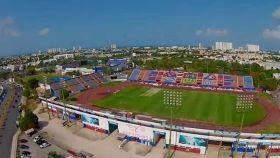 Merida is the hub and it is the oldest city in the Yucatan Peninsula. They have a lot of French influence, so when you see the homes or the haciendas there, they are incredible. You will find a lot of beautiful colonial homes in Merida. There are a lot of Americans who go down there to buy these older, run-down properties or structures, and they rebuild them. Merida has a nice regulation that the buildings downtown and in the zone, should not be torn down. You’re not allowed to...

Merida is the hub and it is the oldest city in the Yucatan Peninsula. They have a lot of French influence, so when you see the homes or the haciendas there, they are incredible. You will find a lot of beautiful colonial homes in Merida. There are a lot of Americans who go down there to buy these older, run-down properties or structures, and they rebuild them. Merida has a nice regulation that the buildings downtown and in the zone, should not be torn down. You’re not allowed to cover up the façade or the structures. They really want to protect the old culture and the architectural design of the place. It has done wonders to the downtown area. Going to Merida is like going to a town in the 1920s or the early 1900s.

There are theaters here. We just went to the Nutcracker in a theater that was built in 1915 and it’s just amazing. Along with that, there is another three theaters that you’ll find in Merida. They just opened a museum featuring the Mayan culture and history. It’s a beautiful, brand new, participative museum for kids and adults.

Baseball and soccer are favorite pastimes of the people in Merida so there are a lot of baseball stadiums over there. Yachting is a big thing in Merida, too. A lot of families have their yachts or sailboats that they keep those in Progreso, which is only about 25 minutes away from Merida. There is also a Jack Nicklaus golf course in Merida and a community that is essentially living right there on the golf course. Everything keeps coming back to Merida, as it is the hub of the Yucatan. All the major universities have a school in the Merida zone.

Cancun, on the other hand, was only established in the 1970s, so it is a very new city. You will find about eighteen golf courses up and down the coast of the Riviera Maya. I talked to a gentleman recently who said, “You might not know about this Tom, but what’s unique about Cancun is that you have a Jack Nicklaus golf course here, a Nick Price golf course, a Robert Trent Jones golf course, and several other signatures golf courses and they are all open to the public.” So as a tourist or as someone who lives in Cancun, you can play on these courses. A lot of times in the States, such as in Florida, you are not allowed to play on these types of golf courses unless you are invited by one of the members. Here in Cancun, to play on these courses, you don’t need to be a member; you could just come off of the street and play golf.

The Mayan history here in the Yucatan is another big attraction. We have the Tulum Pyramid, which are the only pyramids in the Mayan civilization built right on the beach. They were built on the Tulum beach and are just amazing… postcard beautiful. It’s just beautiful to see these ruins overlooking the beach. Then, a lot of people haven’t heard about the Coba Pyramids, but that is one of my favorite locations. They make not just your typical pyramids that we are used to seeing. These are rounded pyramids. It is now one of the new Seven Wonders of the World and they receive an incredible amount of visitors every day.

Relevant to sports, Cancun has a professional soccer team that won the national championships around 3 years ago. Cancun also has a professional baseball team called Los Tigres that won the national championships in 2015. So for the sports fans who are retiring down here in Playa del Carmen, you would be only 40 minutes away from a beautiful stadium where you could watch soccer or baseball. The little league is a different league but kids have these soccer and baseball teams here, too. Soccer is all over the place. Nine out of ten kids here in Mexico play soccer.

A lot of people who retire here in Yucatan love participating in charity events such as helping Mayan kids.  Most of the infrastructure is based on tourism like hotels in the cities like Playa del Carmen and Tulum but as you start going inland towards the west and you start to go into the jungles, you will find little villages populated with Mayan people. Many of the Americans who live here just love to help and raise some money for the Mayans. They get involved in activities that are geared towards helping the Mayans learn how to read and things of that sort. You can find that within 30 miles of Playa del Carmen.

We also have something very unique to the Yucatan Peninsula-- the cenotes. Cenotes are basically sink holes. The ground caves in and then water fills it so it looks like a beautiful pond with crystal clear Caribbean-colored water, which is just amazing. Tourists love to go to the cenotes when they want to cool down. They also love to go scuba diving and do other extreme sports in the cenotes. They explore these underground rivers, which connect one cenote to another. The place is just full of caverns.
(Stadium in Cancun, Mexico, pictured.)
Posted March 4, 2016 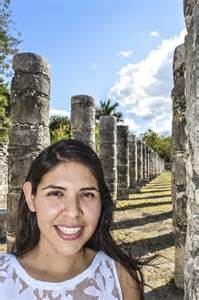 The culture of Yucatan is that the people are very friendly. The Yucatecans don’t trust the Mexicans from other parts of Mexico maybe because some parts of Mexico are more violent than others.
Yucatecan people consider themselves distinct in many ways maybe because of their language. Many Yucatecan people still speak Mayan, but the Mexicans in other parts of Mexico don’t. Yucatecan people see themselves in Yucatan in the same way Quebecers see themselves in Canada- as being very distinct.
Most Yucatecan families, especially in rural areas, would rather build a fire on the ground and make tamales and tortillas the old fashioned way than use gas, and they still raise a few chickens and grow their own vegetables. Many of the Yucatecan families eat indigenous plants and use them in medicine, and they have their own kind of parties- their own way to have a wedding or a baptism. The family systems in the Yucatan are very strong and committed, and have been slower to catch up with modern times.
The Yucatecans are resistant to embrace modern culture and thus they maintain their traditional ways. It’s not like they couldn’t if they wanted to; they just choose not to. The younger generation is starting to embrace modern culture because of the Internet.
(Pictured: Yucatecan woman standing near ruins.)
Posted January 26, 2017