I believe there are many advantages to having a

I believe there are many advantages to having a second passport, but few, if any, disadvantages. I've had two passports for over seven years now. 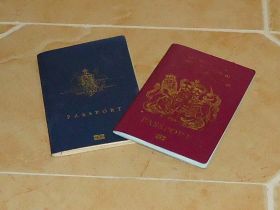 I was born in England, and through marriage I ended up living in Australia, where I became a citizen and received a second passport and dual nationality.
Since leaving Australia in 2008 I have traveled extensively and always carry both passports with me.
I discovered one of the great advantages to having a second passport when traveling through South America with a friend from the States. Each South American country charges for an entry visa a fee equivalent to that charged for it's own citizens when traveling in the other direction.
So, for example, entering Argentina the cost might be $40 for a citizen of the UK, $0 for an Australian, and $125 for a person carrying a US passport. Obviously I'd decide I was Australian at the Argentinean border.
On our journey this became a bit of a standing joke. "Oh, free for me if I'm English coming into Brazil. How much for you Val? $125 again? Oh dear!" I didn't pay one cent in visa fees in South America by chopping and changing my citizenship as appropriate. My friend shelled out over $500. I'd say my second passport certainly paid for itself on that trip.
Of course there are all the other advantages too. I can choose to live and work in either location. I have the freedom to go and live elsewhere if a country becomes intolerable for political or financial reasons, or for any other reason at all.
I can also choose where I live for tax purposes, and to whom I report my income. I believe this isn't a luxury afforded to holders of a US passport, who have to report all income, no matter from where it is sourced, and where they are living.
Disadvantages? The only one that comes to mind is that on occasion I am asked a few pointed questions at borders, particularly the US. If I fly from England, obviously I leave as a UK citizen, but I have to arrive in the US as an Australian, as my Australian passport carries the electronic authorization that the US insists I have to pay for every few years.
With my Australian passport showing no evidence of where I have been just before arriving at their border sometimes results in an invite into a small office. Producing the second passport usually clears the issue pretty quickly.
However, I have had quite a few amusing border incidents, and have written about them at length in my latest book, "Paradise Delayed".
If you have the opportunity to get a second passport, I'd highly recommend it, just for the extra options it gives you.
xxx