True what everyone says. As a dual-passport hol 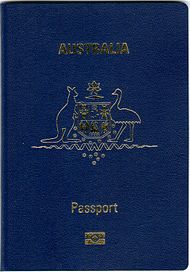 True what everyone says. As a dual-passport holder having two has been both
an advantage and a trap; choosing the right one when entering a country can
avoid waiting lines but the visa has to be in only one and I sometimes took the
wrong passport when dealing with officialdom... ouch!
US holders face the very slight risk of being singled out by Islamic nut-cases in
the unlikely event of hijacking, perhaps; then the US passport could be hidden
and the second produced.. but this is fantasy stuff.
(Cover of Australian Epassport equipped with with a microchip with biometric information for faster airport processing, pictured.)
xxx