When you retire abroad and you have just pe 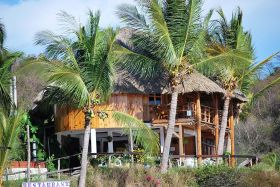 When you retire abroad and you have just pension or Social Security income, your tax liability will not change because there's nothing that the US government offers you as a retiree that allows exempting retirement income from taxation. Your US taxes will be basically the same as if you were living in the US if your only source of income is retirement or pension income.
However, if you are working abroad, whether you are working for a company abroad or working for yourself, there are ways to eliminate or dramatically lower your tax burden because the IRS allows you a couple of different options on the tax return itself.
One is something called the Foreign Earned Income Exclusion whereby approximately US $100,000 worth of foreign earned income could be excluded from your tax return. Let's say you make $100,000 working for some foreign or US company and you're physically working abroad. The $100,000 shows up on your tax return as a wage, while a minus $100,000 would appear further down on that tax return to wipe it out so that you basically have no tax liability.
There are certain tests that you must qualify for to be able to utilize the Foreign Earned Income Exclusion. For most expats who are permanently living abroad, qualifying is quite easy.
There are people who live abroad in higher tax jurisdictions where the effective tax rate that they are paying in that country is higher than it would be in the US. Even in Third World countries like Peru, for example, if you're making a modest income, you're paying more taxes in Peru than you would in the US. In this case, the preferred way to avoid or eliminate tax on the US tax return would be to utilize foreign tax credits.
The reason I say that the foreign tax credit is preferable in this situation is that it could potentially wipe away all US taxes because every dollar paid in foreign taxes is offset in the US. If you have foreign tax credits left over, which means you paid more taxes locally than you would have in the US, these get carried over.
The same expat who then moves from a high tax jurisdiction to a lower tax jurisdiction country, could use his or her carry over tax credits in a place where he or she would be paying less taxes than in the US. These carry over credits could be bankable.
Another reason why foreign tax credits are great for people who have children is that the child tax credit was eliminated a couple of years ago when one utilizes the Foreign Earned Income Exclusion on the tax return. Now, if you're using the foreign tax credit to eliminate your tax liability and you've got two kids under the age of 17, you could potentially get $2,000 in tax refund from the IRS without having paid any taxes to the IRS. This is why utilizing foreign tax credits can be the preferred way of taking care of your US tax return.
If you're using the Foreign Earned Income Exclusion and you qualify via either one of the two tests, it is possible to still pay no taxes in the country in which you are making the money if that country utilizes what's called a territorial tax system or has a zero tax rate. There are many countries in the world that have a zero tax rate or a territorial tax system. One example of a country with a territorial tax system is Panama.
If you are a US tax payer working in Panama and/or making money in Panama, it could be possible that you make $100,000 in Panama, utilize the Foreign Earned Income Exclusion to exclude out that $100,000 from the US tax return, and pay Panama zero taxes.
There are many expats who have local businesses or work for a local company and they pay taxes. There are people who work online and they are off the radar screen. If you're off the radar screen in a foreign country and you're not paying any taxes locally, you would not utilize the foreign tax credit because you haven't paid any taxes. You would clearly use the Foreign Earned Income Exclusion.
The tax situation mentioned in Panama as an example, I would bucket this more generally as a situation wherein if you are not paying taxes locally, then clearly the Foreign Earned Income Exclusion would be the preferred method.
For those with dual citizenship who have businesses in the country that they're in and paying local taxes that are higher than what they would pay in the US, it would be better to utilize the foreign tax credits.
(The beach town of Mazunte, near Oaxaca,Mexico, pictured.)
xxx