To navigate, use menu bar to the left

Are there American-trained doctors in San Miguel de Allende? 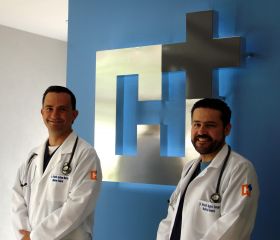 Yes, there are American-trained doctors here in San Miguel de Allende. I know a few who have received their specialty degrees and/or specialty courses in the US or Europe. There are also American naturopaths who are practicing here without a medical license in Mexico.  They are popular among the English-speaking expats who prefer homeopathic medicine. We also have two Mexican doctors who have duo degrees in general medicine & homeopathy.  They offer cutting edge alternative medicine such as stem cell & anti-aging therapies.
(H+ doctors, San Miguel de Allende, Mexico, pictured.)
Posted May 14, 2016
Need great, usable research about moving to Mexico? Get these FREE!
eBook describing the year-long Mexico road trip of a typical, newbie couple and their two dogs, “Our Year on the Road & Living in Mexico—Adventures, Challenges, Triumphs, Lessons Learned.”
Research study of over 1,100 Mexico expats, “Expats in Mexico—Expectations, Worries… and How It All Turned Out.”
Our newsletter, containing fresh, realistic answers and stories about living in Mexico—without the spin.
?
We will never rent or sell your email address.
Lane Simmons - RE/MAX Colonial San Miguel de Allende Contact Lane Simmons 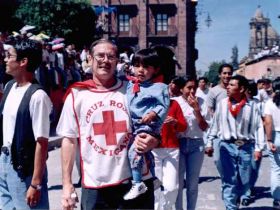 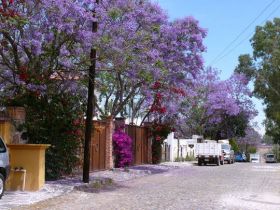 Yes, there are some American-trained doctors in San Miguel de Allende. Many of them are retired and in many cases, choose not to practice due to the long credentialing process. There are a few American doctors who practice though, some of whom speak not only English and Spanish, but a few other languages, as well. One of them is Dr. Robert Maxwell.

Dr. Maxwell is both American and Mexican. He can communicate well with English-speaking people, like Americans and Canadians.

A very well-known doctor is Dra. Meslie Marie Flores. She was born in the U.S. and is Mexican. She speaks English, Spanish and French. Her patients in San Miguel, of which there are many see her totally through her coming to her patients’ home. These doctors have a fee of about 800 pesos. However, many walk-in clinics are 40 pesos per visit.

You do not have to be concerned that the training and standards in San Miguel de Allende are not up to that in the US and Canada. There are several here that meet this criterion. In addition, the much larger city of Queretaro, which is 45 minutes away, has large, excellent hospitals and doctors, as well.
(Pictured: Jacaranda in bloom on street in San Miguel de Allende.)
Posted February 28, 2018
Greg Gunter - Dream Pro Homes 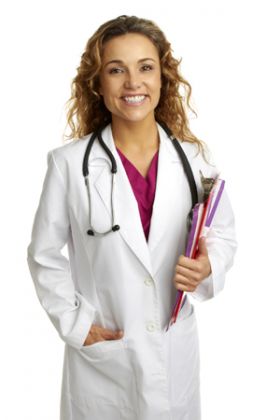 Yes Readers, I personally know and visit several American-trained doctors here in San Miguel de Allende and indeed throughout Mexico, and increasingly more of them are women.
Many physicians might attend UNAM in Mexico for their general medical degree, then receive their specialist degree and / or complete their residency and internship in the U.S.  These are doctors that you know are dedicated to their profession because they could stay in the U.S. and earn up to ten times what physicians earn here in Mexico, where a typical doctor’s visit runs 600 to 900 pesos (roughly $32 to $48 USD) for a full hour’s visit.
Posted April 15, 2017
Jonathan Peters - Ventanas de San Miguel 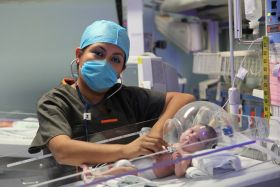 There are American trained doctors in San Miguel de Allende. I have two daughters who were both born here and my wife's OB-GYN had a recognition plaque on the wall that he had been trained in an American university. It's not uncommon to have US trained doctors in San Miguel de Allende at least during their fellowship or residency.
The healthcare during my wife’s childbirth was remarkably impressive. I have family members who are medical malpractice defense attorneys who were here for both of my daughters' births. They were inside in the O.R. together with the anesthesiologist, the OBGYN, the doctor running the show, the pediatrician, and two nurses, which is US $2,000 for a C-section in San Miguel de Allende. We received three days of really good hospital care afterwards. The hospital bill would have been $30-40,000 in the States. The level of care was professional but with extra level of attention and warmth to the whole process that would have been the envy of a lot of people in the States. We were fortunate not to need a lot of healthcare.  However the healthcare provided by the pediatricians is extensive and we've been very happy.
It wasn't important to me whether the physician was trained in the US or not. I have faith in the Mexican healthcare system. I'm not wealthy, just like a lot of people living in Mexico, and the medical care tends to rise to the economic level of the patient. There are a lot of capable doctors in Mexico that inspired a lot of confidence in me to stay here for the healthcare and not to need to fly to Austin, Houston or Dallas.
San Miguel de Allende's medical care options are expanding big time but if there are any medical care options that are missing, Queretaro (one of the closest bigger cities with over a million people) is 40 minutes away by car. In Queretaro there are a lot of doctors with medical education from the US or from countries that have an outstanding level when it comes to medical education.
You can basically get the healthcare you need covered in San Miguel de Allende, but if you couldn't, we're more than half an hour away from some world class hospitals with healthcare that’s comparable to you get in the States. Queretaro has one of the largest shopping malls south of the US border, which is half an hour away from San Miguel de Allende and has every store that you could ever imagine. The same applies to healthcare since Queretaro’s been booming so much that with upper class people, private healthcare is really top notch.
People who aren't doing well financially can participate in Mexico’s socialized healthcare and still get great level of TLC or customer service.
(New born at Hospital General Bicentenaro, Mexico, pictured.)
Posted December 26, 2016
Ian T. Clement - Clement and Associates 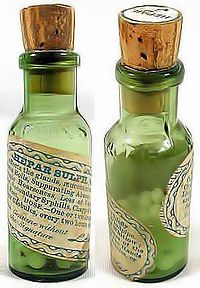 Most of the traditional doctors that I know in San Miguel de Allende are bicultural doctors. There’s a cardiologist in town that I think is half American. We worked with a couple who aren’t homeopaths but are called naturopaths. They have treated my parents and my family, too. I’m not a big advocate of traditional Western medicine. We try to do a little bit of pulling from all kinds- traditional Mexican medicine and Asian medicine. If I can have tea or do something natural to treat an illness, I’ll avoid taking over-the-counter drugs. I never get sick, so it works.
All residents and citizens of Mexico are entitled to Seguro Popular, which is basic immediate emergency care. If you fall down and need stitches, they will treat you there. If I were to have a minor accident, I would go there and get stitched up, and then go home. If I were in a more serious accident, I would probably go to the city of Querétaro, which is 45 minutes to an hour away, where there’s a good hospital called H+. I’ve had surgery there, as have other members of my family, so I feel completely confident in the infrastructure and personnel of that hospital.
In the last 10 years, things have gotten so much more sophisticated in this region of Mexico, and it’s a nice thing to know that we’ve got maybe not world-class hospitals, but ones that could certainly compete with plenty others in the First World.
I’m going to sign up my family and my employees for IMSS, which is the more comprehensive healthcare system in Mexico. IMSS is the federal healthcare system that also falls under public pensions. Signing everyone up for IMSS is one of the steps that my office is taking to get more formalized. Since we have a bigger staff now, it’s our responsibility to have everybody covered. It would certainly be horrible to think that somebody under my employment got hurt but didn’t have insurance coverage.
Not everyone is covered by IMSS. IMSS is something that you pay for. Seguro Popular covers all citizens of Mexico, including people who are here on a permanent and temporary VISA. Only people who are here as illegal aliens, or as tourists, don’t enjoy that entitlement.
(Homeopathic preparation, pictured.)
Posted November 23, 2016
Eric Chazaro - Keller Williams Allende 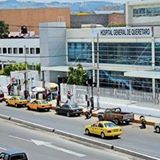 The doctors in San Miguel de Allende were not trained in San Miguel de Allende because there are no med schools here. Most of the doctors that you would find in San Miguel have either trained in Mexico City, Guadalajara, or even in the US. Most of them are bilingual. You could find specialists such as cardio-pulmonologists, internists, and gastroenterologists in San Miguel that have been trained all over the world so they are just as good as any other doctor in Mexico City or any other doctor that you would find anywhere else in the world. Some of the ones that I go to for consultation have even trained in Europe.
If you want to get a specialized treatment or if you need to have a complicated surgery done and if it is something that you can plan rather than have it be an emergency, I would recommend that you look into options in the city of Queretaro, which is a city of over a million people and just 45 minutes away by car from San Miguel de Allende. Queretaro has some of the best hospitals in the country of Mexico. You could have aesthetical surgeries, hip replacements, cancer treatment, or any other type of specialized treatment in Queretaro.
(Hospital General de Queretaro, Queretaro, Mexico, pictured.)
Posted June 06, 2016
Daniel Ortiz - Coldwell Banker SMART 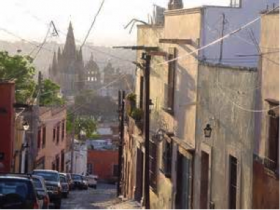 Yes, there are American-trained doctors in San Miguel de Allende, some of whom I know personally.  Some are specialists and some are general practitioners.
Some of the physicians here in San Miguel de Allende are quite popular among the expats.  One example is Dr. Roberto Maxwell, whose specialty is internal medicine and critical care but he also practices cardiopulmonary medicine. Dr. Maxwell was trained in the US in San Diego, California and is affiliated several American boards.
There are several doctors here in San Miguel who have great reviews and overall feedback from their patients here.  People are just comfortable working with them and being treated by them, especially those in the expat community.
(Narrow street in San Miguel de Allende, Mexico, pictured.)
Posted May 21, 2016
Contribute Your Answer

Are there English-speaking doctors in San Miguel de Allende?

How much do healthcare and medical services cost in San Miguel de Allende?

How good are the medical centers, hospitals and health clinics in San Miguel de Allende, and how close are they?

How is the dental care in San Miguel de Allende?

Are the doctors in San Miguel de Allende good?

Find for profit, non-profit and religious organizations.
Are you sure you want to perform this operation?

/questions-and-answers?view=answers&task=get_answer Report This Submit Move Move to another question Assign Assign to another user Information!